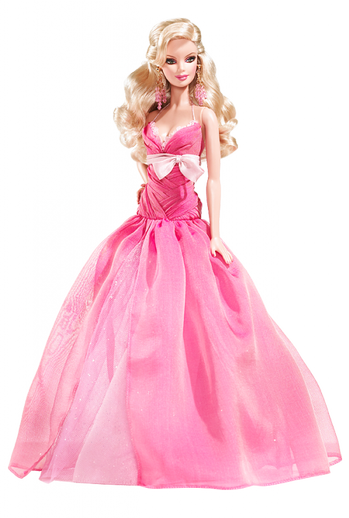 An iconic doll in her iconic pink.
"Barbie's small and so petite
Her clothes and figure look so neat
Her dazzling outfit rings a bell
At parties she will cast a spell
A purse and hats and gloves galore
And all the gadgets gals adore!"
—The jingle to the first Barbie commercial.

A popular doll line, manufactured by Mattel, that has been around since 1959. Partly a revolution in doll design, because until then most fashion dolls were made to look like little girls. Barbie was made to look like a young woman. When she was first created, her figure was more akin to that of a normal young woman, but later adjustments changed her dimensions in different ways so that she would maintain a more natural figure under the thickly hemmed clothes.

The original storyline attached to the dolls was that of Barbara "Barbie" Millicent Roberts, a teenager and the oldest of several sisters, and her career as a model. Her surname and original age are rarely brought up now, and she generally plays adult characters, being showcased in various careers

Since 2001, Barbie has also been featured in a long-running series of animated movies that aired on Nickelodeon and were released through home video.note Since mid-2017, however, the new movies have been released through Netflix instead. The earlier movies were mainly based on Fairy Tales and famous ballets, but also included originals like the Fairytopia series. The movies tend to be accused of Tasting Like Diabetes, especially the newer ones, but have surprisingly strong, positive portrayals of women: i.e., the girls help each other without second intention and don't always bond only over guys.

Barbie is also the subject of controversy, due to her figure being stylized and therefore impossible in Real Life, and thereby supposedly giving girls an "unrealistic" role model, though her figure was slightly modified in the late 1990s in response to these complaints. Mattel is careful to make sure Barbie's image remains "wholesome" and getting dolls into roles that were once seen as unsuitable for women. Mattel featured a NASA Astronaut Barbie in 1965, just two years after Valentina Tereshkova (from the Soviet Union) became the first woman to go into space. She became a CEO starting in 1985, and Mattel has been releasing "Barbie for President" dolls since 1992.

Barbie has become a stock parody over the years; The Simpsons has Malibu Stacy (Lisa's frustration with a talking model that had the personality of The Ditz was the focus of a whole episode, inspired by a real controversy over a talking Barbie which could say, "Math class is tough!"), the Gwendy dolls from Small Soldiers are a blatant Expy, complete with P.O.T.U.S. and Astronaut figures, and Rugrats had Angelica's favorite toy, the Cynthia doll. Then she's finally parodied herself in Pixar's Toy Story 2 and Toy Story 3.

Barbie got her own webseries called Barbie: Life in the Dreamhouse in 2012, which features her and her family and friends in a Reality Show Sitcom with a wide demographic appeal. She later received a more down-to-earth fictional vlog series called Barbie Vlog.

In April 2014, news broke that Columbia Pictures and Mattel would collaborate on a live-action Barbie movie. After Amy Schumer and Anne Hathaway dropped out from being cast as the title role (the former drew backlash for being overweight) and the film rights being transferred to Warner Bros., Margot Robbie was officially cast as Barbie in January 2019, with Greta Gerwig as director and co-writer with Noah Baumbach. The cast also includes Ryan Gosling as Ken, Emma Mackey, Will Ferrell, Simu Liu, America Ferrera, Kate McKinnon, Michael Cera and Alexandra Shipp. The film is slated for a 2023 release.

The Dolls of the World line:

There have been a number of animated productions starring Barbie, including:

There have been various miscellaneous Barbie-related media, including:

There have been various book series starring Barbie, such as: