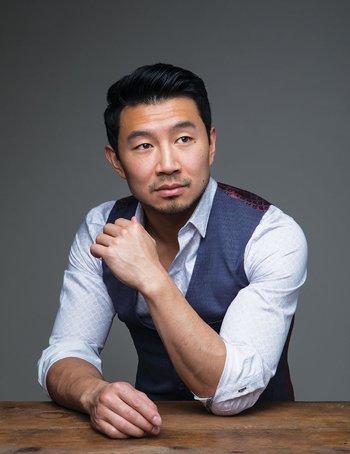 "You know... I never saw myself as the hero of my own story growing up. I struggled to find any Asian characters onscreen, and there were fewer still that made me feel truly proud of my heritage."
Advertisement:

Liu is best known for his role as Jung Kim in the CBC sitcom Kim's Convenience, based on the play of the same name by Ins Choi, and Paul Xie in the drama Blood and Water, for which he received much acclaim. He previously often worked as a stunt performer and played bit roles in Canadian television.

In July 2019, Liu was announced to portray the Marvel Comics character Shang-Chi in the 2021 Marvel Cinematic Universe film Shang-Chi and the Legend of the Ten Rings, becoming the first Asian lead of an MCU film entry.

Tropes related to his career: