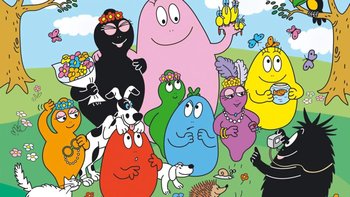 They're one big happy family.
"Here is the star, it's Barbapapa
He'll introduuuce...
All of the other Barbapapas
They've got a lot of wild disguises
They can change their shapes and sizes
Very easily!"
Advertisement:

If you live in France, chances are you've heard of Barbapapa, a series of children's books from the 1970's that were created by the French-American couple Annette Tison and Talus Taylor. Since then, the series has become popular worldwide with many books being sold in different languages, and it has gained three animated series. The title itself is based on a child's mispronunciation of the French term for cotton candy, "Barbe à papa" (literally: daddy's beard).

Barbapapa himself is a generally papaya-shaped, pink shapeshifting Blob Monster who grew from the ground in two humans, Cindy and Frank'snote Claudine and François in French garden. The shapeshifting is usually accompanied by the saying "Clickety click—Barbatrick!"note "Hup hup hup, Barbatruc !" in French (or in the 1970s British dub, "All change!", and in the 2019 reboot, "Click clack click, Barbatrick!"). He tries to fit in with the human world while using his shapeshifting ability to help those around him.

After travelling around the world in order to find himself a mate, Barbapapa finally comes across a female of his species (more shapely and black-coloured) named Barbamama. They start a big family together and produce seven children; four sons -

as well as three daughters -
Advertisement:

After the success of the book series, an animated series of the same name began airing on ORTF Télévision and TF1 in France in 1974, and would help the franchise gain more popularity. Originally animated by PolyScope BV in the Netherlands, the second season saw a switch to Japan with the studios KSS and Topcraft. Every single character was voiced by the narrator, Ricet Barrier in the first season, while they're Suddenly Voiced in the second. Two seasons of the series were produced with 100 episodes in total, and every episode was also 5 minutes long. It gained a Dutch dub, and two Japanese dubs; one of which aired on TV Tokyo in Japan, and the other was released by Sony Music Entertainment on home media.

In 1999, an anime series known as Barbapapa Around the Worldnote "バーバパパ 世界をまわる" in Japanese, and "Barbapapa autour du monde" in French that was produced by Kodansha premiered on NHK Educational TV. The series continued the adventures of the Barbapapa family as they travelled around the world. Lolita, a dalmatian dog that the family brings along on their trips that first appeared in the books would become a series regular.note She was also in a few episodes of season 2. The anime was very short-lived in comparison to the 70s series as only one 50-episode season was made, and it wasn't distributed to many countries (although like the original, it still did receive an English dub under Centauro). However, in 2001 it received a PlayStation Licensed Game in Japan.

In June 2017, TF1 announced the production of a reboot of the series entitled Barbapapa: One Big Happy Family! (also known as Barbapapa and Family)note Barbapapa en famille ! in French, that would later premiere in France in November 2019, and would be distributed to many Nickelodeon and Nick Jr. channels the following year. Other than being distributed to many more countries in various languages, what made this series stand out from the other two is that now each episode is 11-minutes long as opposed to five.

Wait, what were all their names again?