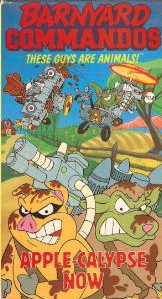 Barnyard Commandos is a French-American animated series produced by Murikami-Wolf-Swenson and IDDH, based off the toyline created by Playmates Toys . The premise is... about as normal as one can get for the early 90s toy-based cartoons.

We follow the exploits of two groups of farm animals mutated via eating radioactive waste from an abandoned military experiment. We have the groups R.A.M.S. (Rebel Army of Military Sheep) and P.O.R.K.S. (Platoon of Rebel Killer Swine) as they fight in a cartoonish fashion to what amounts to Harmless Villain tactics on both sides; only stopping when it’s time for lunch.

The series was largely forgotten until June 19, 2020 when it was announced Cloudco would partner with Megapolis Toys to make a new line of figures.

Putting a potential future revival in the cards.