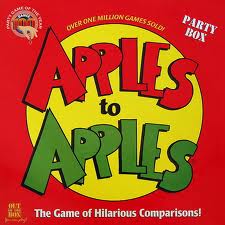 People tend to like games of word association. Apples to Apples by Out of the Box Publishing takes this idea and runs with it. Each player draws a hand of seven red nouns, and then take turns being the judge and drawing a green adjective card, with the other players tasked with submitting the red card they believe most fits that adjective. Of course, it's smart to play the judge as well as the cards, and making a completely inappropriate suggestion can lead to a player winning a given round, too.

The position of judge rotates every round and the player who wins the round keeps the adjective card for that round. Whoever gets a certain number of greens (or has the most whenever everyone gets bored) is the winner.

See also Cards Against Humanity, which takes the core gameplay of Apples to Apples and employs gratuitous amounts of Black Comedy.