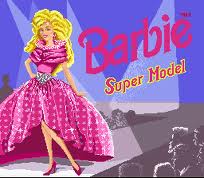 Barbie Super Model is a 1993 game for the IBM Personal Computer, Sega Genesis and Super Nintendo Entertainment System in which the player plays as Barbie, going through her everyday life. For example, the player does a fashion show on stage, skating on the beach, and driving Barbie's convertible around the city. Many of the games are arcade-style side-scrolling, like having Barbie's car drive horizontally across the screen while trying to steer clear of other cars.