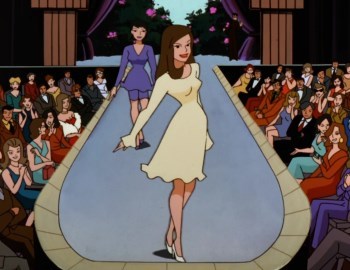 ''And I do my little turn on the catwalk.''
Advertisement:

A bunch of people modeling new clothes while the surrounding crowd gets a good look at them. Usually the Fashion Models walk and pose one at a time down a raised aisle, known as a catwalk, but this can also be done by unveiling a series of tableaux one by one. In live action, it shows off what a good costume department can do.

In fiction, it's likely as not that an important character is either designing the clothes or modeling them. Otherwise a key event in the story is happening there. Or if not, they are often a chance for the film's costume designer to let rip and try something high-fashion-y. Often the clothes will be Impractically Fancy Outfits, more meant to show off the designer's abilities and tastes than to actually be worn (doesn't stop some eccentric people from that anyway).

This was very popular in old movie musicals, and still is popular in Side-Story Bonus Art.