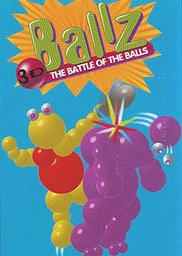 Giving the world "Ballz" a new meaning.
"To be the champion, you gotta have Ballz!"
Advertisement:

Ballz (sometimes referred as Ballz 3D) is a quirky Fighting Game, developed by PF Magic and released by Accolade for the Sega Genesis and Super Nintendo in 1994. It was later ported to the 3DO as a director's cut in 1995.

Hence the title, you play in a pseudo 3D game environment as eight spherical characters trying to beat The Jester and his henchmen.