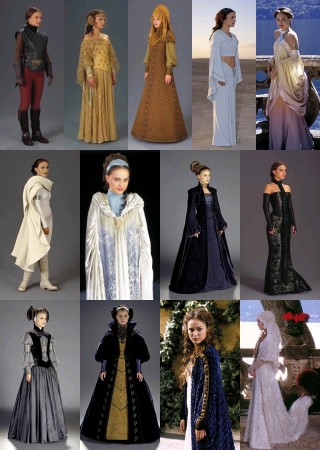 Meet Padmé Amidala, the galaxy's biggest clotheshorse. How much? This is her wardrobe in just one of the movies.note And there's still a couple outfits missing!
"All I have to say is that she walks through a doorway, and has a wardrobe change. I got one — sorry, two dresses and the first one looks the same all the way around."
— Carrie Fisher (Princess Leia, on Padmé Amidala in the Star Wars prequels)
Advertisement:

Some characters never seem to wear the same outfit more than once. Whether they are rich, or shouldn't have nearly enough clothes, they seem to have a new outfit very often, from for every other episode, to for every other scene.

This takes special effort regardless of being live action or animated, as a whole new costume needs to be made (or grabbed from stock) in some way.

In fiction this can be justified by characters having a personal Fashion Designer, and/or the character being a Fashion Model.

Occasionally, in Real Life, actresses will have it included in their contract that they get to keep any clothes they wear during the show (Debra Messing did for Will & Grace, as did Pamela Anderson for V.I.P..) When you combine that with the fact that if a show is popular enough, designers will send freebies to shows for some possible publicity, it gives an incentive to have characters change clothes as often as possible.