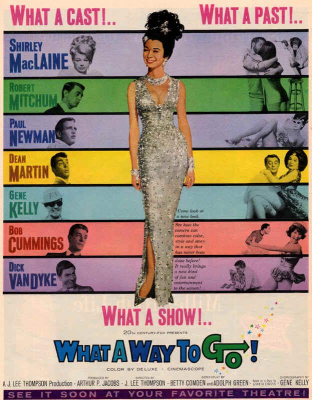 What a Way to Go! is a 1964 Black Comedy film directed by J. Lee Thompson and starring Shirley MacLaine as Louisa May Foster, an unwilling Black Widow who falls in love with, marries and loses four husbands through the course of the movie, amassing an unwanted and ever-expanding fortune in the process.

As Louisa relates her life-history to a psychiatrist, each of her marriages is depicted as a parody of a different film genre: with Dick Van Dyke as a silent movie, Paul Newman as a pretentious French film, Robert Mitchum as a Hollywood romantic blockbuster and Gene Kelly as a musical. And then there's Dean Martin's Leonard Crawley...

What a Way to Go! provides examples of: