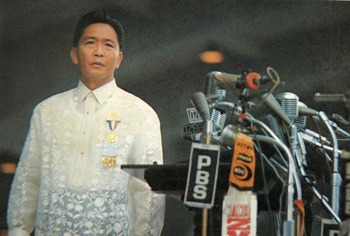 "This nation can be great again".
"My countrymen, as of the twenty-third of this month, I signed Proclamation #1081 placing the entire Philippines under Martial Law."
— Marcos when he declared martial law on television, September 23, 1972
Advertisement:

Ferdinand Emmanuel Edralin Marcos (September 11, 1917 – September 28, 1989) was a Filipino lawyer, politician, and kleptocrat who was the 10th President of the Philippines from 1965 to his ouster in 1986. He ruled as a dictator under martial law from 1972 until 1981. He had four children with his wife Imelda: Maria Imelda "Imee" (governor of Ilocos Norte, now senator), former senator and presidential candidate Ferdinand "Bongbong" Jr., Irene, and Aimee (adopted).

Born from politician Mariano Marcos and Josefa Edralin, he studied law at the University of the Philippines, and spent some time studying while incarcerated due to being implicated in the assassination of his father's political rival Julio Nalundasan in 1935note then-associate justice and future president Jose P. Laurel acquitted the Marcoses in 1940.. Not much later, World War II came while Marcos was called for active duty in the army; he served as an intelligence officer (a desk job, not combat duty) and would eventually survive the Bataan Death March in 1942. Marcos would later make claims about being the "country's most decorated soldier," allegedly performing combat feats and racking up medals that would have impressed Audie Murphy, and also claimed to head a guerilla group named "Ang Mga Maharlika" ("The Warriors", after a Pre-Hispanic term), which was also disproved by US Army records.

After the war, Marcos became a two-term congressman at his native Ilocos province from 1949-1959, then became senator from that year until 1965 and the Senate President from 1963 until the same year he was elected president, making him the last Senate President to become the country's chief executive.

During the 1965 elections, he ran partly on a campaign that would make "the nation great again," which he won over re-electionist Diosdado Macapagal. He was reelected with of over 60% in the 1969 elections (winning against Sergio Osmeña, Jr.); it would be the penultimate time a Philippine president was elected by majority (the NAMFREL count of the 1986 snap elections had Cory Aquino winning a slight majority over him).

While his first term was marked by massive infrastructure projects (notably the Cultural Center of the Philippines among others), his second term (the 1935 Constitution allowing for two four-year presidential terms) was marred by increasing civil unrest fueled by charges of corruption and a mounting Cult of Personality. The civil unrest was particularly spearheaded by college student activists and is otherwise known as the First Quarter Storm of 1970, and when Marcos met with their leaders he pointedly refused to promise he would step down at the end of his term. The leftist insurgency was also reborn during his term with Jose Maria Sison's Communist Party of the Philippines displacing an earlier, pre-World War II Partido Komunista, and the Moro insurgency in the Muslim-dominant south was also codified with the formation of the Moro National Liberation Front (MNLF) in 1972. The civil unrest reached a crescendo with the bombing of the opposition party's rally at Plaza Miranda on August 1971, where he blamed the communists for instigating the attack. All of these eventually led to Marcos declaring martial law on 23 September 1972 (signed two days earlier) under the pretense of developing the "New Society" ( Bagong Lipunan), which lasted until 1981.

The martial law period was marked by human rights abuses, detainment of political opponents akin to a purge, forced disappearance of both activists and civilian critics, redistribution of confiscated companies to cronies and associates, and press censorship. Marcos' closest cronies would eventually be named the Rolex 12, which included future president Fidel Ramos (then head of the constabulary), businessman Eduardo Cojuangco, and future senator Juan Ponce Enrile (then defense minister). Marcos also had the 1973 Constitution ratified, which changed the form of government into an In Name Only parliamentary system (the parliament was named the Batasang Pambansa), of which its first elections were held in 1978.

On the diplomatic front, his regime marked the first time the staunch US ally has opened relations with Deng Xiaoping's China and the Soviet Union.

Under his regime, the government multiplied its external debt by a factor of over 70 (from less than half a million US$ to over $26 billion in 1985), some of which went to the Marcoses (they are thought to have stolen at least $10 billion, enough to earn them a spot in the Guinness World Records as the world's biggest thieves). This corruption became symbolized by Imelda's obsession with shoes - thousands of pairs of them were found at Malacañang by 1986 - and her ridiculous shopping sprees abroad. Eventual mismanagement of the loans led to the economy crashing down, especially after political instability caused by senator Benigno "Ninoy" Aquino's death in 1983.

The turning point for the Marcos regime was the assassination of opposition leader Aquino in 1983, when he was shot dead at the airport upon his return to the Philippines, while leaving his plane. He had been immediately detained once Martial Law started and had been only released in order to be treated for heart ailments in the US. The brazenness of the killing shocked the country and the world, as Aquino was accompanied by several foreign news media personnel who captured his final hours on camera right up to the assassination itself, with only the fatal moments happening offscreen but caught in audio. The actual mastermind is still unknown and has become the country's equivalent of Who Shot JFK?, with its own infamous footage to boot, with an official "Lone Gunman" explanation being offered up and rejected by the public, and with fingers instead pointing at all directions. This led to mounting political instability in the country, as the various political opposition groups united in the wake of Aquino's death.

This in turn culminated with the downfall of Marcos with the EDSA "People Power" Revolution of 1986. Marcos had been last elected in 1981 after he had lifted Martial Law for appearance's sake, thought to be due to the recent visit of the Pope and the impending Reagan presidency. Under the 1973 Constitution, elections were due in 1987, but due to international pressure, he declared snap elections in 1986. Ninoy's widow Corazon Aquino, or "Cory", became the opposition candidate. The mass protest gathering of civilians at the titular EDSA (Epifanio delos Santos Avenue) was triggered by controversies surrounding the snap elections earlier on February 7; results gave conflicting claims on who won between Cory Aquino and Marcos. Commission on Elections canvassers then walked out en masse on February 9, citing fraud from the Marcos camp. At the same time, a power struggle which had been brewing among factions in the government, amplified by Marcos's failing health and the issue of succession, finally boiled over. A coup d'etat plot led by Enrile - which was supposed to culminate in an attack on the presidential palace, resulting in a junta headed by him - was exposed on February 22. Enrile thus holed up with his supporters, which included Ramos and future senator Gregorio Honasan (then colonel) in Camp Crame and Camp Aguinaldo, declaring their "withdrawal of support" from Marcos, citing the election fraud and other issues. Cardinal Jaime Sin, through radio, then exhorted Filipinos to protect the coup plotters (the truth of the coup plot was not confirmed and made public knowledge until years later), signalling the start of the "non-violent revolution". Civilians filled the roads with their bodies to stop Marcos's oncoming tanks. Priests, nuns and regular people stood up to the soldiers "armed only with prayers". By February 25, the military had switched allegiances, and the opposing camps held separate inaugurations, though the Marcoses shortly fled to Hawaii after, marking the end of the 21-year Marcos regime.

In his dying days, Marcos told then-Vice President Salvador Laurel that he would give 90% of his possessions to the Filipino people in exchange for being buried in the country, but this unsurprisingly has not come to pass. He died on September 28, 1989, due to multiple complications. His body was returned to the country in 1993, then from there until November 2016, his remains were refrigerated and displayed in a mausoleum at Batac, Ilocos Norte. His corpse was finally buried at the Heroes' Cemetery (trans. Libingan ng mga Bayani) on November 18, sparking massive protests as the Supreme Court voted 9-5 to allow for his burial there a week earlier. The exact time of the burial was unannounced and took the public by surprise, such that the mausoleum in Ilocos Norte still had a body on display, leading to speculation that it had been wax all along.

To this day, Marcos remains the single most controversial figure in Philippine history due to actions committed during his regime. Bringing him or his family up on any discussion will rile up some feathers.

Marcos and his family are referenced/appear in the following works: