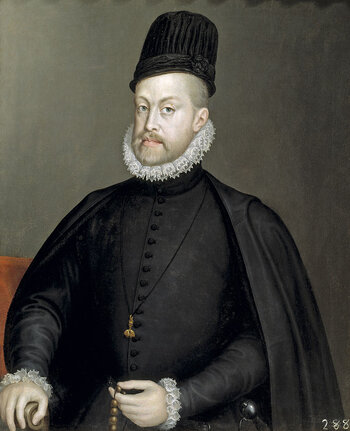 Philip II of Spain and I of Portugal (21 May 1527 – 13 September 1598) from the House of Habsburg, known rather non-indicatively as "Philip the Prudent", was the king of Spain, Portugal, Naples and Sicily, as well as technically England and Ireland for a time (and Duke of Burgundy and Lord of the Netherlands), during the mid-to-late 16th century. As the sovereign of both the Spanish and the Portuguese Empires and a blood ally to the Holy Roman Empire, like his late father Charles V before him, Philip could be considered the most powerful man in the planet at his day, with all of its related, varied and existential troubles.
Advertisement:

Possibly one of the biggest base-breakers in the history of historiography, describing Philip II is a pharaonic work. Thousands of books about him have been written through the centuries from all possible perspectives and agendas, to the point one could say that, like Nietzsche, there is a Philip for every author who tries to write about him. To make things worse, Philip himself was a man so concerned with not cultivating any public image and memory of himself, especially by the standards of his own time, that he left no official biography or even letters. Some have called him the original culprit of the Spanish Black Legend, not so much by what he did but what he did not do: in a time in which his many enemies started churning out hot propaganda about the supposedly disproportionate savagery of the Spanish Empire, Philip's stance was a staunch Head-in-the-Sand Management, whether because he believed the pen to be worthless compared to the sword or just because he did not care very much about what people thought... as long as they were Catholic.

For traditional Anglophone and Protestant media, Philip might be the original Big Bad of history: the "Demon of the South", a megalomaniac emperor, husband to the infamous Bloody Mary, who sought to spread his reign of terror to the entire world to bind it to the mind-numbing authority of the Catholic Church and the always unexpected Spanish Inquisition. Certainly, by our pop culture standards, Philip is one of those historical figures who genuinely resembles a fictional villain, in this case of the Dark Messiah variety: chronicles profile him as a deadly serene man, always dressed in stern black and adept of religious mysticisms to the point of supposedly building his palace over a hellgate, who went to war basically against the entire world, investing uncompromisingly the resources of his global empire and his fearsome armies in the mission of stamping out any opposition to his religion. It is indeed set on stone that Philip, as an inflexible Catholic, would not suffer a Christian world not subjected to the authority of the Pope, and some have attributed him a true Messiah complex, a belief not unlike that of his father Charles of being the champion of God against all sorts of heretics and Muslims. Under his reign, the Iberian Union would simultaneously and boneheadedly take on the Dutch, the British, the French, the Ottomans and roughly everybody who fit the quota.

A recent current of thought has been much more benevolent with him, considering Philip a beacon of the opposite to all which the Black Legend claims. The Spanish Golden age began under the patronage of Philip, with masses of genius writers, artists, architects, engineers, thinkers and men of science, like the underrated School of Salamanca, flowing into the landscape of The Renaissance. He also kickstarted the first true wave of commercial globalization, extending trade routes around the world that managed to connect the old Europe and the new America to realms as remote as the China of the Ming Dynasty, while at the same time managing to be at the head of a diverse, composite monarchy where he didn't even wield absolute power. He could even be ironically considered a defender of the indigenous in his own right, writing royal orders to pursue crimes against his many American subjects, officializing their languages so they didn't have to learn Spanish, sending scholars to record as much native culture and knowledge as they could, and ultimately ruling against conquistar by the sake of conquistar. The modern western democracies owe to him much of the merit of helping preserving Christian Europe against the Muslim Ottoman Empire, setting up the ground over which the Enlightenment, globality and modernity were born, without counting the number of pioneering systems of administration that were innovated in Philip's reign.

Regardless of how he is viewed, it cannot be denied Philip was, for good and bad, a man who could not stand idle. A tireless, hard-working bureaucrat of a densely intellectual nature, he spent most of his time doing paperwork reportedly equivalent to the job of five or six men, obssessed with micromanaging every small corner of his imperial machine through a keen messaging system - a trait that would keep it well oiled at the cost of becoming its very feet of clay, as Philip's proneness to favor underlings who would follow his orders to the letter often led him to entrust his exploits to yes-men and disregard the massive pool of military and political talent he had access to. Furthermore, Philip represents well the perpetual state of the Spanish Empire by the sheer number of wars he failed not to wage: his zealous refusal to lose any country to The Protestant Reformation dragged him to a whack-a-mole of international conflicts that bankrupted the Iberian Union thrice, only refloating every time thanks to its vast natural resources and control of several centers of finances, which eventually caused a comparable inflation. As said above, it's difficult to judge whether Philip and his reign deserve scorn for having wasted their humongous advantages in such silly ways, or credit for having reached so far in feats with such a flawed approach.

Philip was at the head of a Spanish army probably at its very historical peak, a "jungle of Spanish lances" captained by old veterans like Fernando Álvarez de Toledo y Pimentel and Álvaro de Bazán, younger promises like John of Austria and Alexander Farnese, and talents born in the wild like Julián Romero, Juan del Águila and Jerónimo de Ayanz. He also enjoyed a network of spies across the entire Europe, helped by the many nationalities of his subjects and the dense commercial exchanges of his monarchy, that was almost too good for what he could actually do with it. Ironically, in contrast to his father's more typically Germanic attitude that War Is Glorious, Philip himself was disgusted at war and considered it a Necessarily Evil solution to secure the universal rule of Catholicism. The first time he stepped on a battlefield, he could not detract his mind from all the blood and corpses, apparently muttering, "Is it even possible that my father liked this?"

A famously contemplative, even melancholic character, who had endured stoically not only political mishaps, but also various health problems throughout his life, Philip managed to die at the advanced age of 71, yet reportedly depressed that he failed in his enterprises - although, loyal to himself, he still micromanaged the preparation of his own funeral. Always the philosophic man, who had built the biggest private library in all of Europe, patronized several religious mystics, and even engaged in Alchemy in order to explore the mysteries of God's work (and maybe produce some gold and elixir of life if he could), he allowed for his sons to see him in his deathbed, emaciated and unable to control his own sphincter, so they could see "what became of the kingdoms and lordship of this world". He was succeeded by his son Philip III, who put an end to some of his wars, although not all. Ultimately, Philip left behind a global state that was still the empire on which the sun never set, but now exhausted and exsanguinated in its monumental effort to wage war against all the other nearby powers, for the sake of a religious doctrine that, in hindsight, was never really worthy the effort.

A lot of his legacy still lives in Spain. He was the first monarch to make Madrid the Spanish capital, and part of his buidings, such as his impressive palace-monastery-library-etc. of El Escorial, are still standing, like his network of roads, which was superseded by modern high ways. The Philippines in Asia was named in his honor. Ironically, Philip himself would also sow the seeds of the dynasty that would replace the Habsburg in Spain, the French House of Bourbon, as when the Protestant pretender Henry IV of France realized he could not take the throne with the Iberian Union among his enemies, he made the shocking turn of just converting to Catholicism ("Paris is well worth a mass") and let the whole conflict die off. Henry would be the first Bourbon king.