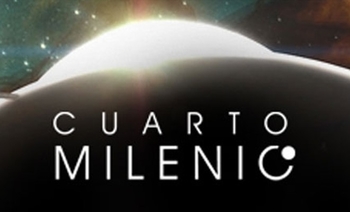 Will you join us in the travel?
"The only thing from today that makes me connect with magic and mystery like when I was eight is Cuarto Milenio."
—Guillermo del Toro
Advertisement:

Cuarto Milenio (Fourth Millennium) is a Spanish television program created and presented by journalist couple Íker Jiménez and Carmen Porter. It focuses on mystery investigation, covering a potentially limitless variety of topics that include conspiracies, criminology, anthropology, archaeology, ufology, parapsychology, history and several sciences. On air since 2005 and still going strong, Cuarto Milenio is one of the most successful Spanish TV programs ever, a landmark of their national pop culture, and a show that has attracted both controversy and a solid fanbase through its many seasons.

It was born of Jiménez's previous radio program Milenio 3, which he created for Cadena SER in 2002 and continued producing as a "brother program" until 2015. Cuarto Milenio quickly became the face of the two, and it became such a audience phenomenon that it is popularly believed the show carries the entire weight of its network Cuatro over its shoulders. Reasons for this, especially in a time in which anything resembling Paranormal Investigation is rarely respected, were its efficient stage production, its sheer journalistic eclecticicism and ability to address interesting topics, and ultimately the charisma of Jiménez himself. The latter usually describes Cuarto Milenio as not just a mystery show, but a way to draw people towards culture.

The program's place in pop culture is entertainingly divisive: in Spain, if you don't know Cuarto Milenio as just "that (scary) show about ufos and ghosts," you are probably a viewer who stays up late on Sunday nights to watch the heck out of it. In any case, the program has one of the longest list of science guests in Spanish television, as well as a series of big name fans (including film directors Alejandro Amenábar and Guillermo del Toro, as quoted above), and its influence reaches even the other side of the Atlantic.

Cuarto Milenio has a had a handful of spinoffs, among them the brief expansion Cuarto Milenio Zoom, the geopolitical piece La mesa del coronel, and the multi-topic program Horizonte.