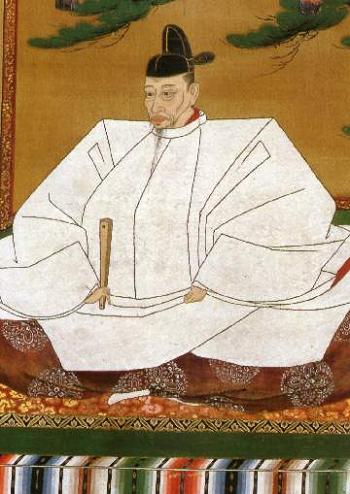 "If the cuckoo does not sing, make it sing."
Advertisement:

The second of the unifying warlords of Japan during the Sengoku Period and a prime example of Rags to Riches. He was born Kinoshita Tōkichirō in March 1537, and his early life remains somewhat obscure. His parents apparently wanted him to become a priest, but he ran away from the temple and became a soldier instead. In 1558, he became the sandal-bearer of Oda Nobunaga. He was eventually drafted into Nobunaga's army, changed his name to Hashiba Hideyoshi, and used his resourcefulness to become a valuable asset. Hideyoshi proved to be very competent that he rose through Nobunaga's ranks, showcasing the effect of Nobunaga valuing meritocracy.

When Nobunaga was slain, Hideyoshi was the one who inherited his ambition to reunite Japan and avenged his lord by defeating Akechi Mitsuhide in Battle of Yamazaki. However, he could not become the official shogun due to his commoner origins, the best he could get was kampaku. Regardless, Hideyoshi redistributed the land's incomes to the land and applied several policies to stabilize them (one of them including the Sword Hunt, by seizing the blades of samurai so they can't cause trouble in times of peace again), but then made a fatal mistake to sate his own ambition and attempting to strengthen his legacy and accomplishment by trying to invade Korea. The campaign was already failing before his death, and had to be stopped completely when Hideyoshi died (in September 1598). However, one unintended outcome of the Korean Campaign was the weakening of the Ming Dynasty; the huge costs to the Ming in helping to defend Korea contributed to its fall less than 50 years after Hideyoshi's death.

Since Hideyoshi's heir, Toyotomi Hideyori, was only five when his father died, Hideyoshi left his administration in charge of five magistrates: Ukita Hideie, Maeda Toshiie, Mōri Terumoto, Uesugi Kagekatsu and Tokugawa Ieyasu. It was Tokugawa, not Toyotomi, that would become the ruling family of Japan, after Ieyasu won a decisive victory over Ukita Hideie and Mōri Terumoto at the famous Battle of Sekigahara in 1600. Fourteen years later, Ieyasu finally moved against Hideyori (whose list of offences against the shogunate ranged from rebuilding the great fortress of Osaka and gathering an army of the Tokugawa clan's enemies to, of all things, sponsoring a temple bell with an inscription that the shogunate claimed contained subversive wordplay), who perished the next year when Ōsaka Castle fell after a long siege.

A controversial topic in regards of the Korean Campaign and Hideyoshi's actions revolve around an order referred as the 'nose hunt'. In order to ensure discipline and his soldiers were fighting, Hideyoshi demanded that his soldiers brought proofs back to Japan in form of the heads of their enemies. His soldiers decided that it's too much of a hassle to bring their enemies' heads so they decided to just cut off the noses of the Korean people and use them as proofs. In his own megalomania, Hideyoshi then built a monument of those noses to celebrate the campaign. This is a monument that still existed today, known as Mimizuka ("ear mound", a euphemistic renaming from the original Hanazuka, "nose mound"), and still remains one of the main reasons Korean and Japanese people do not get along, especially when later Japanese governments took a defensive stance on Hideyoshi's controversial monument.

Hideyoshi is most known for his resourcefulness and his ability to manipulate events. Some historians to this day still argue that Mitsuhide's betrayal was secretly engineered by Hideyoshi. That being said, props should be given that he actually succeeded in unifying Japan and actually did good to his people's welfare. Too bad that his dynasty didn't last past two generations. It should be pointed out that Hideyoshi was also ruthless. He forced his heir-apparent Hidetsugu to commit suicide after an unsuccessful coup, but that apparently was not enough for Hideyoshi, who ordered Hidetsugu's entire family, including 31 women and children, executed. Moreover, his failure at the Korean Campaign was credited as one of the reasons why the Toyotomi dynasty did'nt last and it left a sour note to his legacy (not to mention the Mimizuka monument, as mentioned above). It is probably also why very few productions in the modern day ever touch that campaign in any fictional portrayal that features Hideyoshi, regardless of how he's portrayed, and only featuring the Sengoku Period. The Korean Campaign, nevertheless, has begun to become a period of interest for some nuanced fictional worksnote such as the American video game Age of Empires II (which covers a more general history of the world), the 2014 NHK Taiga drama Gunshi Kanbei

(which portrays the affair as an entirely bad idea borne out of Hideyoshi's megalomania, which destabilized the Toyotomi ripe for Sekigahara), as well as the 2014 Korean war film The Admiral: Roaring Currents

(about the heroics of Admiral Yi Sun-shin, who repelled Hideyoshi's navy) and the 2015 Korean drama Jingbirok, both understandably coming from a pro-Joseon/anti-Hideyoshi POV..

His nickname by Oda Nobunaga was 'monkey' and 'bald-rat', though nobody except Nobunaga would dare call him that to his face. Usual portrayals would depict him being a wannabe schemer, though positive portrayals of him do exist, being an eager and hard-working man that earns his peers via hard work (close enough of being a Shonen hero that defies Hard Work Hardly Works), that could seep into being a bumbling man as his vices. The middle-ground portrayal of him tends to be a Fallen Hero type of character, when he was younger, he was an idealistic hero, but at one point of time (usually after his unification of Japan or even as early as Nobunaga's death or another time), he was faced with harsh realities that made him do a lot of morally questionable things and became much more ruthless, no longer the ideal hero he was before. He's also included in one issue of Badass of the Week.

For the most part, Hideyoshi was mostly accompanying Nobunaga with his campaign. But some of his more notable successes will be listed below: