Everyone knows the Queen. No one knows Isabel.
— First season tagline 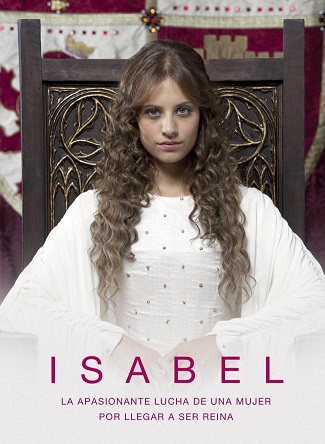 Companion book cover.Eng The thrilling fight of a woman to become queen.
Advertisement:

Isabel is a Spanish Historical Fiction series produced by Diagonal TV and aired by national broadcaster Televisión Española (or TVE for short) and its international channel, TVE Internacional from 2012. It is also available in DramaFever in Spanish with English subtitles.

Conceived as a Spanish answer to The Tudors, the three-season series follows closely the various shenanigans that marked the life and reign of Queen Isabella I of Castile "The Catholic" (1451-1504), beginning in the time when a teenage Isabel and her brother Alfonso were brought from reclusion in the Castle of Arévalo to the Decadent Court of her half-brother, King Enrique IV, in Segovia. While surviving ridiculous levels of court intrigue, wars and treacherous advisors, what was once a little girl so far in the line of succession that nobody though she had a hope to rule, puts to good use her strenght and ambition to become the historical figure that we remember today as the Queen that united the crowns of Castile and Aragon through her unauthorized marriage to King Ferdinand II, conquered Granada, sponsored Christopher Columbus, founded The Spanish Inquisition, and expelled the Jews from Spain. A film depicting the aftermath of Isabel's death, The Broken Crown, was produced by the same cast and crew and was originally intended to be followed by the sequel series Carlos, Rey Emperador (about Isabel's grandson, Holy Roman Emperor Charles V), but ended being released after CRE finished its run.

Even before airing, Isabel acquired fame in Spain for its very Troubled Production that nearly got it cancelled before debut. Isabel was expected (and advertised) to begin airing fall 2011, but in a example of Loophole Abuse, TVE pushed the premiere back a whole year to meet its government-approved budget, which is based on the cost of programs aired during the year. Meanwhile, the second season was put on hold, the sets were dismantled, and Diagonal TV even organized a theatre premiere in May 28, 2012 to pressure TVE into airing it. Yet after release in fall, Isabel became an unexpected success and one of TVE's most popular programs (averaging 20% share), earning the praise of viewers and critics due to its acting, historical accuracy, sets, and fabulous wardrobe design.

Since the vast majority of the series content is History, there will be no covered spoilers bellow. Read at your own risk.