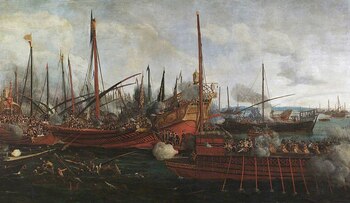 "... the grandest occasion the past or present has seen, or the future can hope to see..."
— Miguel de Cervantes, Don Quixote, Second Part, The Author's Preface.
Advertisement:

During the Middle Ages and Renaissance, there was a constant naval war between the Christian and Muslim States in the Mediterranean. When there was no major campaign involved it was a handy excuse to be Pirates. Circa 1570, the Republic of Venice was entering a prolonged decline in Mediterranean dominance and the Ottoman Empire was extending its hegemony into the world's oceans.

By the reign of the Sultan Selim II (affectionately known as Selim the Sot), the Empire was recovering from its failed attempt to conquer Malta. The Ottomans turned their gaze toward Cyprus which was rich in sugar and an important base, under the authority of the Venetians at the time. The Ottomans invaded Cyprus, and the threat provoked an alliance among the Mediterranean Christian states, chief among whom were Venice and Spain. The Turks managed to conquer the island, but the Christian fleet arrived to defeat them in a battle of annihilation on 7 October 1571. The ironic result was that the Turks lost the main battle but ended up with the island. However, arguably this was a Pyrrhic Victory for the Turks as so many skilled sailors and warriors were lost that the Turkish fleet would be incapable of major effective operations for a generation — the galleys themselves were rebuilt quickly but fleets at the time depended so much on the skill of sailors that this was something of a bluff — by which time its preferred methods were so obsolete that recovery was impossible.

This battle was a Crowning Moment of Awesome for the Christian powers and was celebrated as such. It was the last major galley battle before galleys were superseded by great sailing warships.

The historical significance of the battle is controversial to this day. First there was the glorification, then the backlash, then the backlash to the backlash, and so on. Evaluations are often colored by nationalism, pro-western bias, anti-western bias, or any number of historical frameworks. At the time in the West it was seen unambiguously as a historical turning-point and a great, even miraculous victory attributed to the intercession of the Virgin Mary. Revisionists portray the battle as an inconsequential side-show, pointing out that the Turks quickly rebuilt their fleet, kept Cyprus, and continued the war, while the Christians did not regain any significant territory. This was the official Ottoman position and how they chose to view the battle in the immediate aftermath. The post-revisionist view is that the battle was important in that the Ottoman Empire never again attempted to seriously compete with European naval power, with the gap between them only continuing to grow over the coming decades. The Ottomans quickly rebuilt their fleet, but mostly avoided engaging the Europeans in naval combat, as their naval technology and tactics continued to fall behind the Europeans. What battles the Ottomans did engage in, they mostly lost. In a greater sense therefore, this battle was the point where Christian navies took control of the world's oceans.

If this position is taken to its logical conclusion, this battle gave Christian empires control not only over most of the world's seas, but the world itself. Ottoman control of eastern trade routes meant the Turks had easy access to the riches of the East, while European powers were forced to develop their naval technology in order to find alternate routes, either West (leading to the discovery of America) or South (around Africa). Europe would be more than compensated for the extra effort. Control over the seas gave them control over trade, money, and everything that goes with it. European naval supremacy would lead directly to European imperialism and colonialism, meaning it would be western Europe that would dominate the world for the next couple of centuries. Turkey having any influence outside of its immediate area was basically out of the question, while thanks to naval power Europe would eventually come to dominate as far away as China. Had the Turks won at Lepanto, it is possible that Western imperialism might have been seriously impeded, particularly in the areas bordering the Mediterranean, Black Sea, Red Sea, and Indian Ocean, and all of history would have been changed.

Bottom line: it was important, an event on par with the Naval Battle of Actium fought not too far away many centuries earlier.