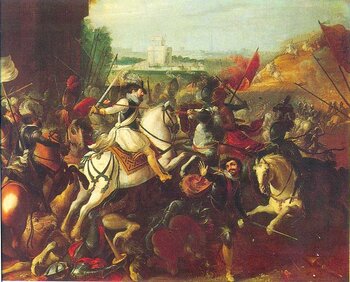 The French Wars of Religion were a period of sectarian civil war during the Kingdom of France from 1562 to 1598 and were part of the larger religious conflict taking place in Europe following The Protestant Reformation; it would only be surpassed by the Thirty Years' War in terms of horror and deaths. However, there was more to this war than just religious differences, for it was also a dynastic dispute that would put A Song of Ice and Fire, and its real life inspiration, the Wars of the Roses, to shame with three main factions driving it: the ruling House of Valois, the Roman Catholics led by the fanatical and ambitious House of Guise and the Huguenots led by the Henry of Navarre. What started out as a brutal conflict fueled by people unable to coexist with each other culminated in a war for the French crown.

The Huguenots were French adepts of Calvinism, one of the Protestant branches which, unlike Lutheranism, didn't receive recognition as an official faith. However, the French monarch at the time - Francis I - was tolerant of Calvinism in his country, unlike most Roman Catholic rulers then. That is, until 1534, when a series of pamphlets and placards were distributed denouncing Catholicism and its practices. Having been criticized for his initial tolerance of Protestants, Francis began a campaign of persecution against them by burning them at the stake. It was during this wave of persecution that John Calvin barely escaped with his life to Switzerland. After Francis' death, his son Henry II was even harsher, escalating the repression by stripping them of rights to worship, assemble and even discuss their faith in public. His reign wouldn't last long because a jousting accident put a lance through his eye, killing him. This left his 15-year old son Francis II as the new king, but his mother Caterina de Medici would be his regent. A young monarch on the throne unable to control the court can only lead to the rise of factionalism with the fiercely Catholic nobles from the House of Guise, though whom Mary, Queen of Scots was betrothed to Francis and, as a result, had huge influence over him. At the same time, the persecution of Huguenots led to radicalization among their ranks where they engaged in iconoclasm by vandalizing churches and destroying statues in areas where they had huge presence, like La Rochelle.

Though it seemed Francis II would be more of the same as his father and grandfather/namesake, his rule would last only a year with him dying in mysterious circumstances (some at the time believed it was poison, but it's suspected he may have died of actual disease). Being childless, he was succeeded by his younger brother, Charles IX, with their mother once again serving as regent. Despite being a Roman Catholic herself, Catherine played the role of a moderator in trying to keep stability between Catholics and Protestants, which wasn't an easy job given she was a widowed foreigner with several underage children, having outlived one of them. She managed to reach a compromise by issuing an edict of toleration which allowed some limited freedoms of worship to the Huguenots. This upset many of the Catholic nobles, especially the Duke of Guise, who perpetrated a massacre against a Protestant congregation, triggering an armed rebellion among their ranks and beginning the First War of Religion.

The first clash between Catholics and Huguenots would set up a pattern for all the ones to follow in this bloody period: a stalemate with neither side being able to fully destroy the other and a peace treaty being signed by the monarchy trying to preserve order. There was one problem: every peace treaty promising toleration or even the right to exist for the Huguenots was considered too much for the Catholics led by the Guise. The first one was considered unacceptable after the Duke of Guise responsible for starting hostilities was assassinated by a Huguenot. Two more wars eventually caught the attention of foreign powers such as Philip II of Spain, the Papal States, the Dutch Republic and many German princes of the Holy Roman Empire, who backed their sides during the conflict to serve their interests - Philip saw himself as the defender of Roman Catholicism and was worried about the prospect of French becoming Protestant right on his doorstep, while the Dutch (who were breaking away from Spanish control) were motivated by solidarity with their Calvinist co-regionalists.

The climate was very unnerving for the Queen Mother, since not only were Protestants pursuing alliances with foreigners to undermine them, but also fellow Catholics were plotting against the House of Valois for being too moderate. As such, a political marriage between the Catholic princess Margaret and the Protestant prince Henry of Navarre was set up in order to contain further hostilities. This backfired horrifically when shortly after the wedding day, a wave of assassinations and mob violence perpetrated by Catholics engulfed Paris during St. Bartholomew's Day, in which it is estimated thousands of Huguenots were butchered by men wearing white crosses and white straps on their arms. This became known as the St. Bartholomew's Day Massacre and the turning point of the French wars of religion, which horrified and outraged Protestants beyond France and even other non-Catholics like Eastern Orthodox tsar Ivan the Terrible (Yes that one) expressed horror about the carnage, whereas certain Catholics like Philip II celebrated it (some say that he laughed like a madman at least one time in his lifetime when hearing about the massacre), although many moderate ones wondered if such bloodshed was worth religious uniformity. Historians debate heavily regarding who bears responsibility for the massacre; the traditional view (as well as of contemporaries at the time) is that the monarchy - either Charles or the Queen Mother - gave the order directly to solve the Protestant problem. Other historians place the blame on the Guise for provoking the mob against the king's orders, given their policies of tolerance. Some find a third way through arguing that while Catherine did not order the massacre, she did not object against it either considering none of the perpetrators were punished.

Following this episode, most of the Huguenot leadership was purged and Henry of Navarre only managed to survive by converting to Catholicism, which he repudiated in the first opportunity he got to flee from Paris. The official version of the story is that the Huguenots were planning a state coup and the monarchy did what he had to be done to prevent this outcome. Two more wars would follow (making a total of five) with more edicts giving rights to Protestants being considered too much for Catholics and hostilities resuming with neither side making any significant gains as the death toll rose until Charles died and his brother Henry (who was just elected King of Poland) abdicated his own throne to inherit the French one as Henry III.

It was thought that Henry III's predecessors were too tolerant and forgiving towards the threat of Protestantism, choosing to give rights and privileges only to be rewarded by rebellion. He decided he would have none of that anymore and issued an edict stripping them of all their rights, ordering them to depart France at once under the pain of death unless they converted to Catholicism. Then, something unexpected happened when Henry's youngest brother Francis died; as Henry had no sons, Francis was his heir presumptive. As such, his next closest relative was none other than his cousin Henry of Navarre, the leader of the Huguenot rebellion, which would pave the way for France becoming a Protestant nation - something that the Catholic nobility would not stand for.

This triggered the final war in the period, also known as The War of the Three Henrys named after the three respective sides of the war: King Henry III of France, Catholic League leader Henry the Duke of Guise and Prince Henry of Navarre. This time, the Huguenots were stronger than ever, being able to win decisively against their Catholic enemies under the leadership of Navarre and with the help of German and Swiss forces, whereas infighting weakened the Catholics. Despite being technically on same side, Henry of Guise disobeyed Henry III's orders and was in fact backed by Philip II and the Pope, who agreed the Valois were too weak to contain the Huguenots, so he acted on his own accord. He provoked mob violence across Paris and encouraged violence against any Protestant they could get their hands on. Sick of being undermined by his own men, Henry III arranged the assassination of Guise after luring him into a trap. This proved to be a fatal move since Henry of Guise was beloved by the Catholic population and now the League was at war with the king, and several of his own supporters joined Henry of Navarre's camp. Henry III would suffer from this greatly when he was stabbed by a monk in retaliation for Guise's death. On his death bed, he assigned Henry of Navarre as his heir and pleaded that he converted to Roman Catholicism as his last request.

With Henry III's death, the House of Valois came to an end, leaving Henry of Navarre free to take the throne, but the Catholic League still remained active and firmly in control of Paris, which was still fiercely Catholic - they were prepared to fight to the death rather than accept a Protestant monarch on the throne. With Spain still supporting the League and resistance remaining stalwart for a couple of years, Henry of Navarre decided to cut the unnecessary bloodshed and convert to Catholicism in order to gain the people of Paris' acceptance. It's generally believed that he was a genuine Calvinist all of his life and only outwardly became Catholic for political reasons due to a famous alleged statement he made that "[Paris] was worth the Mass". The death of the remaining Catholic League leaders made resistance pointless now that Navarre was Catholic and he was eventually crowned as King Henry IV, the first monarch of the House of Bourbon.

The French Wars of Religion were brought to an end with the Edict of Nantes, which maintained Catholicism as the state religion of France, but allowed Protestants to exist with some curtailed rights (they still had to pay taxes, were forbidden from worshiping in certain locations, but were allowed to keep their arms and make their own assemblies). While at the time, peace was considered uncertain as both sides were unhappy with the edict's conditions, there was less resistance to it than previous times since they were both sick of fighting endlessly. That doesn't mean that peace was everlasting since religious tensions remained; Henry IV was assassinated in 1610 by a Catholic fanatic, Huguenot rebellions occurred during Thirty Years' War and for many years afterwards, and Louis XIV would revoke the Edict and re-start the persecution of Protestants in the name of religious uniformity as part of his centralized state agenda. It wouldn't really be until The French Revolution with the Declaration of Rights of Man and the Citizen that French Protestants would gain equal rights as citizens.

The French Wars of Religion are portrayed in the following media: