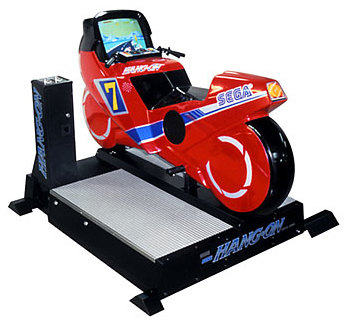 Hang-On is an arcade motorcycle racing game, developed and released by Sega in 1985. The game's goal is simple, as the player races a linear race track divided into several stages within a limited time. What made it so unique at the time, however, was its innovative control scheme originally envisioned by Yu Suzuki: What if, instead of moving joystick, the player has to lean their whole body to steer the vehicle? Taking this idea into the action, Hang-On was designed with a motion-controlled arcade cabinet, where the player's body movement on a large motorbike-shaped cabinet corresponds with the player character's movements on screen.
Advertisement:

Hang-On turned out to be a smash hit, which led to the development of many simulation games inspired by it, like OutRun and After Burner. The game itself also received numerous ports and sequels:

Technically Super Hang-On was the last game released in arcade, but followed by a number of spiritual successors afterward. Enduro Racer (1986) is another motorcycle game designed by Yu Suzuki, and the player rides a dirt bike instead. Racing Hero (1989) is "Hang-On meets OutRun", completed with branching paths at the end of every course. GP Rider (1990) is a single-track racing game where you must outwit the computer opponent. Cool Rider (1994) features digitized riders and really bizarre sense of humor.

The Hang-On series contains examples of: