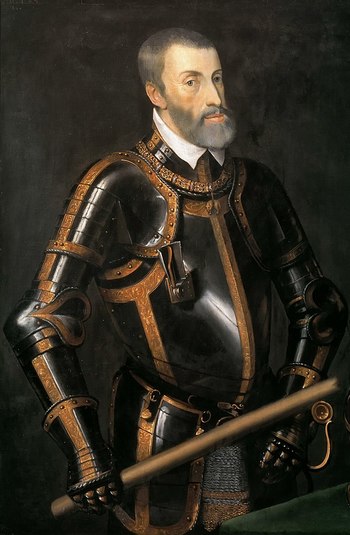 Mommy says it's a strong chin for a strong boy!
"Plus Ultra."
—motto of Charles V; also the national motto of Spain
Advertisement:

Charles V (24 February 1500 – 21 September 1558) was Holy Roman Emperor; King of Castile, Aragon and León; Archduke of Austria; and Duke of the Netherlands, among other titlesnote The amount of titles he held was actually much larger, as he had titles for individual areas in the Low Countries (most of current Belgium and the Netherlands) as well as some titles of places he claimed but where he did not actually rule.. He hails from the House of Habsburg and was named after his great-grandfather Charles, Duke of Burgundy.

Through his mother, Joanna of Castile, he inherited his Spanish territories. Through his father, his Dutch and Austrian possessions, as well as a connection to the Holy Roman Emperor, who was his grandfather Maximilian I at his birth. His aunt Margaret of Austria was regent for him in the Netherlands. He had been betrothed to several princesses, but in the end, he married his cousin Isabella of Portugal, who served as his regent in Spain.

The big enemy for his family was France. Francis I was Charles' rival for the imperial title (with Henry VIII as a distant darkhorse candidate). With Charles' territories encircling Francis' and their conflicting designs on the Duchy of Milan and Kingdom of Naples, this was sort of inevitable. At the battle of Pavia in 1526, Charles was successful in not only defeating the French, but also taking Francis prisoner, strengthening his position. The resulting treaty not only effectively ended French ambitions in Italy, but was also successful in regaining parts of the Duchy of Burgundy that had been lost in 1482, but not the Duchy itself. With the help of his aunt Margaret and a lot of money, Charles was elected Holy Roman Emperor as well.

Apart from the threat of France, another important issue was the rise of Protestantism during Charles' reign. He always remained an unwavering Roman Catholic. In different parts of his lands, there were different rules and not infrequently, people were prosecuted. This did little to stop the spread of various forms of Protestantism in the Empire and the Low Countries.

Making a balance of Charles as a king proves difficult. As both the Holy Roman Emperor and king of Spain, Charles was seen by his subjects as a larger-than-life figure, often referred as "our Caesar", the harbinger of an universalistic dream that many contemplated gloriously. However, just as much as Spain was expanding at the time thanks to its conquests in America, so did its international conflicts as a consequence of Charles' obssession with achieving an unified Catholic Europe by any means necessary. He kickstarted the trend, perpetuated by his succesors with various levels of zealousness and misfortune, of treating the blossoming Spanish Empire as the benefactor, enforcer and workhorse of the Counter-Reformation, investing all of its riches and armies in the (failed) attempt to stamp out the Protestant heresy in whichever distant corner of Europe they could find and reach it - essentially, the beginning of a 80-year-long bane for every Spanish citizen of any race or condition. Speaking of the overseas territories, Charles was seen there as a distant, mercurial monarch, who initiated the first gestures to protect and develop the indigenous communities by advice of the School of Salamanca, but who did not really care that much about them - he was simply focused with Europe, the battlefield of a dream he fought to the last days of his life for yet he never manage to realize.

The amount of territories Charles had accumulated were a strength, but also a nuisance, as he constantly had to travel from one place to another and deal with people from very different cultures and sensibilities, to the point he described himself his reign as a really long voyage. Near the end of his exhausting life, he abdicated, being succeeded by his son, Philip II, in Spain, Italy and the Netherlands, and his brother, Ferdinand I, in Austria and the Empire. His double job as Holy Roman Emperor-King of Spain was divided into two and never reunited again, although his successors at both would contine working together until the end of the Spanish Habsburg branch.

Portrayals of Charles V in media:

Tropes associated with Charles V as portrayed in fiction: