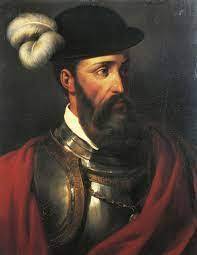 Francisco Pizarro González, Marquis of the Conquista (March 16, 1478 - June 26, 1541), known by the indigenous as Apu ("Lord") and Machu Capitán ("The Old Captain"), was the Spanish conquistador that kickstarted and mostly finished the Spanish Conquest of the Inca Empire. He was a distant maternal uncle to fellow conquistador Hernán Cortés, whom he imitated in the fine art of capturing indigenous emperors and assimilating their rich domains to the Spanish Empire, although Pizarro never managed to come close to match him in relevance in modern pop culture.
Advertisement:

Pizarro's biography is a brutal example of a Self-Made Man. The illegitimate son of an important army captain, he was rejected by his father to That Thing is Not My Child! levels, which some have speculated instigated in Francisco an obssession to prove his military worth that followed him all his life. He also grew up illiterate and in extreme poverty, to the point it's traditionally claimed he worked as a swineherd since his childhood until he could join the Spanish army, where he became an experienced soldier in the Italian Wars under Gonzalo Fernández de Córdoba (his father and his half-brothers all did it at some point). After his arrival to the Indies, Francisco added a long career in local ventures, becoming an underling of the renowned Alonso de Ojeda and forming part of the expedition under Vasco Núñez de Balboa that discovered the Pacific Ocean. Ironically, Pizarro would also lead the men who arrested Núñez on orders of the corrupt governor Pedrarias Dávila, which concluded in his Kangaroo Court and execution. Balboa's letters from the jail imply Pizarro was simply an Old Soldier following orders, but Francisco never commented on this point of his career, perhaps considering the topic was better left as it was.

After the breaking news of the Spanish Conquest of the Aztec Empire by Hernán Cortés, Pizarro soon found his chance to do the same in Perú at the ripe age of 50, hijacking the Inca Empire from the hands of the great Atahualpa in a way that could be better described as a coup rather than a conquest. Threatened by Inca armies who outnumbered his men by several digits to one, pitted against an emperor that was apparently luring them to enslave the bearded foreigners and capitalize on their wonderful toys, Pizarro became possibly the most successful cornered rat in military history and reversed the ambush by playing dirtier at the right moment, capturing Atahualpa in midst of their amusingly fruitless diplomacy. The event earned him the gratitude of all of the tribes whom the emperor had disfavored, after which the empire and its mountains of gold were open to him. Leaving behind a tragic but seemingly genuine friendship with Atahualpa, whom he was forced to execute, Pizarro became the governor and captain general of the whole country, as well as a marquis, until a civil war of conquistadors years later ended up with him murdered by the followers of his own sidekick turned rival, Diego de Almagro.

His facet as a Badass Grandpa should be stressed not only due to his relatively advanced age during his conquests, but also for his ability as both a commander and a soldier, going down in a Rasputinian Death that according to the existent chronicles was as spectacular as the rest of his life. Not less than twelve Almagrists and twenty sword wounds, as well as a hit on the skull with a heavy alcarraza, were reportedly necessary for the old Spanish Apu to stop fighting back.

Unlike the highly cultured Cortés, and unusually for a man of his rank, it's unclear whether Pizarro ever learned to read and write, which didn't impede him from becoming a Man of Wealth and Taste, as he always made sure to surround himself with skilled consultants. It might be a strike of irony, considering that the Inca culture never developed an alphabetic writing system either (although they had the quipu, a system of recording strings so artful that, contrary to poular belief, the Spanish Empire kept it for more than a century until writing caught on).

Like Cortés, however, Pizarro can be said to be way more than the stereotypical gold-obssessed butcher. Bay all accounts Francisco basically fell in love with the Inca Empire after getting to see its greatest works, in especial its capital of Cusco, and issued decrees to protect the indigenous population centers and prosecute any Spaniard who mistreated the natives outside of the battlefields - which turned out to be much easier said than done, of course, due to the large amounts of gold available to those who wanted to try to pocket it. Also, athough he was undoubtedly ruthless with his enemies, he achieved his conquest by wisely presenting himself to the indigenous as a liberator against the grueling reign of Atahualpa, and regardless of its veracity, his effective leadership and diplomacy ensured most tribes would indeed remain improbably loyal even whenever Inca generals revolted and tried to stir the empire against the foreigners. At the end of the day, it would be rather his own countrymen who became the reason he didn't live to see the full pacification of the lands.

Pizarro might have it even harder to get an objective portrayal than Cortés in historiography, though, as his enmity with Diego de Almagro meant he started being a target of propaganda from among his own peers. Partisans of Almagro, as well as and Cortesian chroniclers who wanted to undermine his aura for him not to rival their own favorite, drew an intensely negative portrayal where Pizarro and his brothers were vicious Calligulas who indulged in Rape, Pillage, and Burn against the natives, an image not entirely coherent yet which pervived and remains hard to extricate from his real career.

He was married to a noblewoman of the Inca royal family, Inés Huaylas Yupanqui, who gave birth to the first mestiza of the Inca lands, Francisca. Their relationship later turned sour on suspicions of court intrigues, after which Pizarro hooked up with a rumored Femme Fatale of the Inca nobility, Angelina Yupanqui, and had two sons, Francisco and Juan, although those two were not legitimized.

As mentioned above, Pizarro was also the head of a whole family of conquistadores, four half-brothers and a cousin who also served under accompanied him in his battles, whom we will mention there because people tend to confuse them.