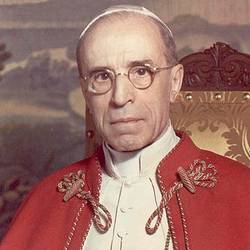 "The work of justice shall be peace"
This is an "Hour of Darkness"... in which the spirit of violence and of discord brings indescribable suffering on mankind... The nations swept into the tragic whirlpool of war are perhaps as yet only at the "beginnings of sorrows"... but even now there reigns in thousands of families death and desolation, lamentation and misery. The blood of countless human beings, even noncombatants, raises a piteous dirge over a nation such as Our dear Poland, which, for its fidelity to the Church, for its services in the defense of Christian civilization, written in indelible characters in the annals of history, has a right to the generous and brotherly sympathy of the whole world, while it awaits, relying on the powerful intercession of Mary, Help of Christians, the hour of a resurrection in harmony with the principles of justice and true peace.
— Pope Pius XII, October 1939, shortly after the Invasion of Poland.
Advertisement:

Eugenio Maria Giuseppe Giovanni Pacelli (2 March 1876 - 9 October 1958) was Pope as Pius XII from 2 March 1939 to 9 October 1958. In the entire history of the Papacy, there are few figures as controversial as him. He is sometimes condemned for his supposed silence and complacency regarding Nazi Germany and its atrocities during World War II, The Quisling of Christianity who's said to have let minorities be massacred under his watch to further his Church's position. Reality was very different.

Before he became Pope, he served as Papal Nuncio in the Kingdom of Bavaria, in the final years of the First World War. During this time, Monsignor Pacelli was highly critical of the Spartacist Rising and the brief Bavarian Soviet Republic which was erected there. He wrote to Monsignor Pietro Gaspari, his predecessor that, "the capital of Bavaria, is suffering under a harsh Jewish-Russian revolutionary tyranny". After the crushing of the event, he worked as a diplomat in the 20s, trying to help the persecuted Church (Catholic and Orthodox) in Russia. At the start of the 30s, he was critical of Catholic parties for entering an alliance with the Socialists and like Franz von Papen, favored the right over the socialist-communist left. Monsignor Pacelli disliked Nazism for its authoritarianism, its clampdown of traditional Church foundations but even in the 30s, he made references to the Jews "whose lips curse [Christ] and whose hearts reject him even today". In July 1933, as Cardinal, he oversaw the controversial Reichskonkordat which aimed to preserve Church autonomy in Germany, and in effect broke the Nazis' diplomatic isolation, as it was the first diplomatic treaty of any kind signed by Adolf Hitler's government. Upon becoming Pope, he promulgated a policy of impartiality and neutrality, even when the Nazis invaded the staunchly Catholic Poland, which as critic Michael Phayer pointed out, was perceived by the Polish clergy as a betrayal. In 1939, he ended his predecessor's ban on the French Far-Right party Action Française, famous for being virulently antisemitic. As a Pope, he was believed to have regarded Communism as a greater evil than Nazism, citing Josef Stalin's invasion of Poland alongside Hitler, and regarded Germany as a bulwark to halt the spread of the USSR westwards and while he outwardly condemned Antisemitism, he allowed Philippe Petain's Vichy France to pass racist laws without opposition or comment. Later, in October 1941, Harold Tittmann, a US Delegate at the Vatican asked the Pope to unambiguously condemn German Antisemitism and persecution of Jews which Pius XII refused citing neutrality.

Behind this public front of diplomacy, however Pius XII engaged in Playing Both Sides. He established contacts with the German Resistance and the Catholic Church played a part in hiding several Jews. Contrary to his nickname of "Hitler's Pope", Hitler is recorded as having said Pius XII and the Catholic Church were "Nazism's greatest enemy" and according to one apocryphal story, once actually tried to kidnap Pope Pius XII from within the Vatican.note The Vatican was subject to an intense infiltration campaign, but it was never successful enough for an operation of this type to be attemptedThe reason for such hatred on Hitler's part, is very well known to modern-day historians: Using Churches as hiding grounds for hunted minorities, issuing fake passports for war refugees and in general doing everything within his power to protect the targets of the Holocaust from Hitler's wrath would logically anger the Fuhrer to quite an extent. Whether these actions were the work of independent clergy were operating on their own or if it was encouraged by Pius XII himself, is not fully established by independent researchers since the Vatican Archives are still kept out of reach, though in 2014, Pope Francis ordered it open to the public well before the statute expired so as to clear the air.

The general view among Historians is that Pope Pius XII followed a pragmatic course, hoping to prevent Nazism from marching into the Vatican or bombing it via air-strike by maintaining a front of neutrality, which nonetheless allowed the Church's Network to save thousands of Jews from The Holocaust. Critics argued that as the most powerful religious leader, at a time when most of Europe and America was highly Catholic, Pope Pius XII could have and should have done more by taking a public stand against Hitler and his antisemitic massacres in the early part of the war. They also note (as does Pope Francis) however, that in many ways, the silence towards racist pogroms conducted by the Nazis is a charge that can be addressed to the Allied Powers as well, notably the controversy regarding the bombing of the railway tracks to Auschwitz. Few historians argue on any serious level that Pope Pius XII was truly "Hitler's Pope". The hagiographic view is that he was truly saving Jews and did what was right in his position, the more critical view was that he was short-sighted and lacking in true political vision and was more concerned about the survival of the Church as an institution during the war.

Clearly he did a damn good job of pretending to be inactive, because after the war, the myth of Hitler's Pope was propagated, despite the blatant evidence to the contrary, by works such as The Deputy

, which established an inaccurate cultural image of him as a weak and hypocritical Pope. The 1999 book by John Cornwell, appropriately titled Hitler's Pope, is one of the more influential modern works shaping the negative perception of Pius XII's conduct during the War, though the book overall is less critical than it's title would suggest, largely painting Pius as excessively timid and privately conciliatory towards fascism. More recent scholarship, including by Cornwell himself have called some of these conclusions (and the evidence supporting them) into question, particularly the notion that Pius XII was secretly a Nazi sympathizer.note Cornwell would subsequently walk back this accusation, admitting that Pius's options were so limited that very little can be construed from his diplomatic actions, though he would continue to be critical of Pius' own refusal to contextualize his actions after the war was over. The pop cultural image of Pius XII as Hitler's Pope still lingers, though professional opinion has continued to moderate as more perspectives critical of a wholly negative image.

An important development occurred in 2019, when Pope Francis decided to commemorate the 80th anniversary of Pius XII's election by opening its archives of Pius's papacy to the public, much to the excitement of many researchers and the trepidation of some Vatican officials, many of whom don't themselves know what the archives contain. Pope Francis expressed belief that allowing the archives to be carefully studied would correct "prejudice and exaggeration” surrounding Pius XII's legacy.

Pius XII is currently a candidate for Catholic sainthood. He has achieved the status of "Venerable", meaning that the only further steps required are two confirmed miracles attributed to his intercession. The popes presiding during the canonization cause have mostly been cautious in proceeding, on the basis of settling the matter of Pius' conduct during the war. Pope Benedict XVI initially advocated waiting until scholars could study the Vatican archives, and Pope Francis' opening of the archives is believed to have been motivated in part with allowing the cause to continue with a clean conscience.

Outside of WWII, Pius XII's enthusiasm for liturgical reform is believed to have laid the groundwork for what would eventually become a complete overhaul of Catholic practice in the Second Vatican Council. He is also responsible for the papal encyclical Humanae Generis, the first official statement of the Church on Darwanian evolution, settling at once the question of whether faithful Catholics could accept the theory of evolution by natural selection. Pius declared that it was perfectly acceptable to regard the theory as an accurate account of the biological origins of life, provided ones' acceptance of the theory didn't cause them to question the divine origin of human souls and God's role in the creation of the world.

On a more morbid note, the circumstances of his death and last rites became infamous, largely thanks to the actions of his doctor Riccardo Galeazzi Lisi. An ailing Pius XII had moved to the Papal summer residence of Castel Gandolfo in 1958, where he passed away on October 9th after a few days of agony. During a comatose spell, Galeazzi Lisi secretly took pictures of the intubated Pope and sold them to a French tabloid. He also guaranteed them the exclusive on Pius's death by agreeing on a secret signal (opening a specific window of the palace); this however went awry when an unsuspecting nun opened the window by her own accord, leading the press to announce the news early. After the actual death happened, Galeazzi Lisi took charge of the embalming process - as is customary for deceased Popes - using a method of his own invention, allegedly based on Jesus' own funeral rites: wrap the body in plastic with a mixture of herbs, spices and essences. This, paired with the unusually hot weather, led to the opposite effect and accelerated the decomposition process, to the point that some of the Swiss Guards stationed outside of the chamber fainted because of the stench. During the journey to Rome, done on a hastily decorated motorized hearse - as the ceremonial carriage wanted by the Holy See couldn't be found - the body further deteriorated: to make it appropiate for a public viewing, an emergency embalming process was conducted and the disfigured face of the poor Pius was covered with a wax mask. This was the last Papal funeral conducted with the traditional full honours, as Pius's successor John XXIII scaled back the plans for his own rites after finding the whole pomp in poor taste (not to mention finding a better embalmer). Meanwhile, Galeazzi Lisi got expelled from the Order of Physicians and banned for life from the Vatican.

Pius XII was also evidently a big fan of cinema and television, even writing some studies about it.

Well researched books about him include: