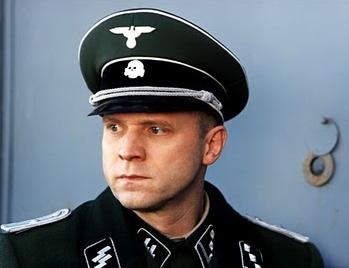 "I have seen what was not meant to be seen."
Kurt Gerstein: They are making us accomplices of a crime that will doom the German people for eternity!
Ludwig Gerstein: Stop listening to British propaganda, please.
Advertisement:

Amen is a 2002 German/French/Romanian film directed by Costa-Gavras which explores the Real Life attempt by SS officer Kurt Gerstein to inform foreign powers about the Death Camps of Nazi Germany during World War II, notably by trying to reach the Vatican, with the help of a fictional young Jesuit priest named Riccardo Fontana.

In 1942, Kurt Gerstein (Ulrich Tukur) of the SS Hygiene Institute travels to Poland to instruct the troops in the safe storage and purification of water, and to observe the use of the new form of the chemical Zyklon B he has developed to eradicate typhus. However, accompanied by a sinister SS doctor, he is taken to the newly established Belzec extermination camp to witness his creation being put to its true, grisly use. A horrified Gerstein returns to Germany and, despite having been sworn to secrecy, he begins desperately attempting to inform the international community of the atrocities. Mindful of the successful campaign against the Aktion T4 program spearheaded by the Catholic Church, he tries to convey the message to the Vatican, but finds his local bishops unmoved.

However, when Father Fontana (Mathieu Kassovitz) hears Gerstein's story, he vows to alert Pope Pius XII in person, as the two men are certain that a clear condemnation from the Holy Father will rouse German Catholics into action once again. Meanwhile, Gerstein returns to Poland to observe the mass murder and provide further testimony. He tells Father Fontana, "I will be the eyes of God in that hell." But he quickly finds himself unable to passively watch, and begins risking his life to sabotage and slow down the killing in any way he can.