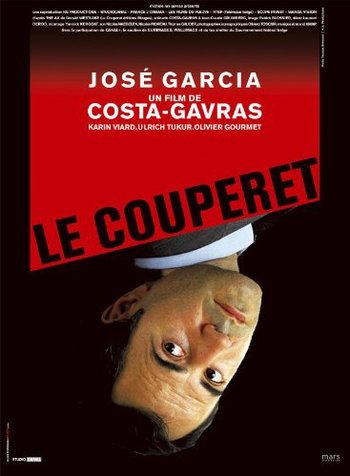 The Axe (Le Couperet in French, US title The Ax) is a 2005 French film directed and written by Costa-Gavras. It is based on the novel The Ax by Donald Westlake.

39-year-old French engineer and manager Bruno Davert (José Garcia) has been working at a paper mill for 15 years, improving products and saving money for its shareholders. One day, the company announces that it is forced to "downsize", so 600 employees are laid off and many of their jobs are instead outsourced to a company in Romania. Bruno loses his job, and he is initially confident that he can easily find a place in another company for the same paycheck.

Despite applying anywhere he can, Bruno is still jobless two years later. One day, he finds the perfect job opportunity in another paper mill. There's only one problem: several other people are as qualified as he is and looking for the same job. Bruno then sets out to eliminate the competition — physically.

The Axe provides examples of the following tropes: