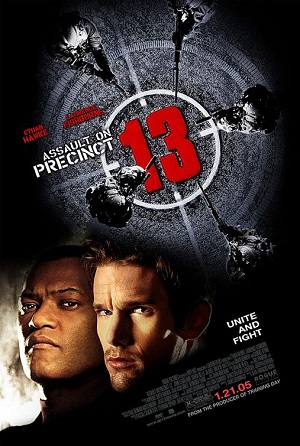 A remake of the 1976 John Carpenter film of the same name, directed by Jean-François Richet, starring Laurence Fishburne and Ethan Hawke.

A notorious underworld boss of Detroit is finally captured by the police on the day of New Year's Eve. On his way to another prison, thick snow storms force the bus carrying him, three other criminals and several police officers to take shelter at the now-decommissioned Precinct 13. Over the course of the night mysterious assailants attack the precinct, forcing officers and criminals alike to band together to survive.

This remake contains examples of: