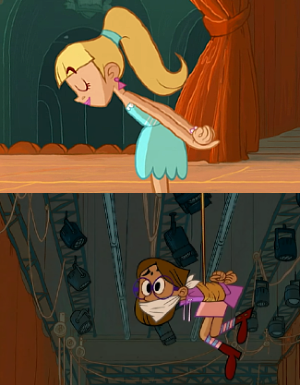 A character (usually a Prima Donna-type) is in direct competition with another for some sort of goal, and resorts to nefarious methods in order to somehow dispose of the competition, whether it be through physical violence, some form of trickery or locking the rival up somewhere they can’t interfere (which may include keeping them Bound and Gagged).
Advertisement:

This is a Super-Trope to the following Sub-Trope examples:

May overlap with Mugged for Disguise or in some particularly grim situations, Dead Person Impersonation or Kill and Replace.

Blaineley sends Bridgette to Sibera to steal her co-host job.

Blaineley sends Bridgette to Sibera to steal her co-host job.