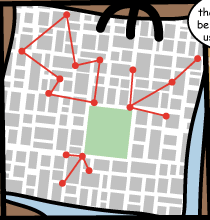 "I think the killer might be trying to tell us something."
"Saw it in a movie once. There was this serial killer running around, and the police detective, he puts this big map on the wall and puts pushpins in each of the murders and reckons the killer's writing out a sign of the zodiac. Capricorn or Cancer or sumthin'. Once he figures that out, he's able to track down the killer and stop him from killing the next victim, who just happens to be the cop's girlfriend. Cop shoots the killer just in time, but 'course he ain't dead the first time. He gets up when nobody's looking, even though he's got six bullets in him, and the girlfriend ends up having to shoot him a coupl'a more times."
"I think I saw that one."
— Gil's All Fright Diner by A. Lee Martinez
Advertisement:

There's a Serial Killer on the loose! He may or may not be the poetic kind, but there is one thing we know about him: he picks his locations very carefully. So carefully, in fact, that it's almost inevitable that each death connects with each other death to make the shape of... something. Maybe it's a inverted pentagram or just a big arrow.

Alternatively, there's no killer, just a lot of weird stuff happening. To find the Weirdness Magnet, you have to map out where all the weird stuff is and find the exact center.

Related is the String Theory trope, which is more about connecting evidence and people together with string on a cork board, rather than on a large map.