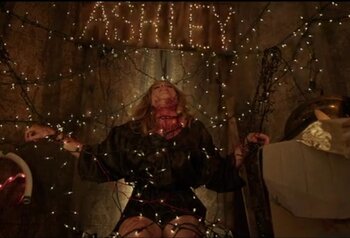 Voted "Most Likely to Have Her Name in Lights"
"The irony is that if you want to die you just have to stay where you are, but if you want to live, you'll have to cut yourself again."
— Jigsaw to a man whom he believes cuts his wrists for attention, Saw
Advertisement:

Some Serial Killers seem to delight in killing, but don't seem to care who their victims are. A Poetic Serial Killer, on the other hand, picks victims who are guilty, in the killer's mind at least, of some sin or other, and kills each victim in a way that reflects that perceived guilt. He may also arrange the scene of the crime in a tableau to make a similar point to the investigating police.

Meaning, the "poetic" in this trope refers to poetic justice. Not a Serial Killer who happens to be a Warrior Poet.

The Serial-Killer Killer can be prone to this if they want to make the point to their murderous victims particularly clear.

Can be considered a dark(er) counterpart to the Vigilante Man, and related to Death by Irony. Compare Ironic Hell, Death by Sex, Criminal Mind Games. For serial killers who follow a theme, but the theme isn't poetically appropriate to the victims, see Theme Serial Killer.