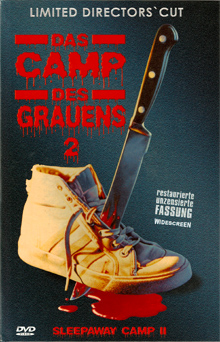 Uncle John: Whatever happened to the good kids in the world?
Angela: Oh, don't talk like that, Uncle John. There's lots of good kids. We just have to weed out the bad.
Advertisement:

Now fully grown up, Angela has been recently released from the mental institute and is now working as a camp counselor at Camp Rolling Hills. Unfortunately for the campers and other counselors, she is still a complete nutbag (with added bonus of high moral standards) and kills anyone who she deems "a naughty camper".

This film, and its back-to-back shot continuation Teenage Wasteland, venture into more comedic side of things and has more winking approach on its subject, since it would be hard to get much darker than the original.