Franchise / A Nightmare on Elm Street 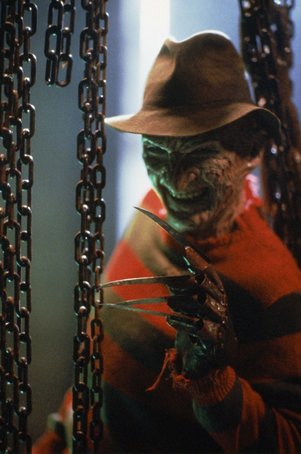 No rest for the wicked... or the innocent.
One, two; Freddy's coming for you.
Three, four; better lock your door.
Five, six; grab your crucifix.
Seven, eight; gonna stay up late.
Nine, ten; never sleep again.
— The song of the series

The Nightmare on Elm Street film franchise centers around Slasher Movie icon Freddy Krueger (played by Robert Englund in every film except the 2010 reboot) and his exploits in killing the teenagers of Springwood in their dreams. The franchise features these films:

A Nightmare On Elm Street is the Trope Namer for:

The Nightmare on Elm Street franchise in general contains examples of the following tropes:

This is a dream. He's behind you.