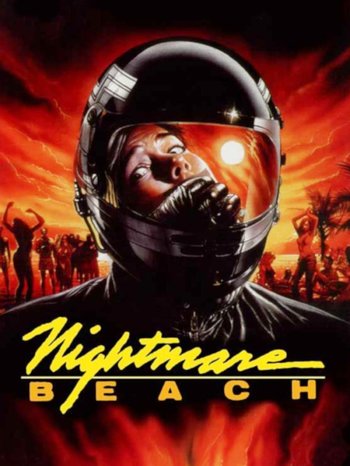 Nightmare Beach, or Welcome To Spring Break, is a 1988 slasher movie written by Harry Kirkpatrick and (with some dispute further elaborated on below) credited as jointly directed by him and Umberto Lenzi (Cannibal Ferox).
Advertisement:

Diablo, the leader of a motorcycle gang, is convicted and sentenced to death for the murder of a young woman. He defiantly snaps at the victim's sister that he's innocent and he'll be back for revenge.

A year after the execution, murders start happening in the middle of Spring Break festivities, and they all involve the victim being electrocuted, just like a certain gang leader.