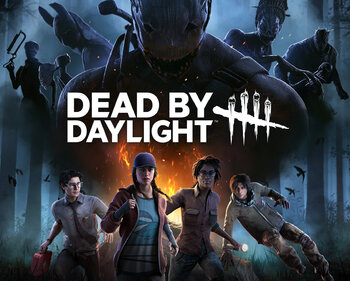 Death is not an escape.
"Death is not death. In this place, life is fleeting. To whomever might find this lore, I can but only provide you with one advice: always move forward."
— Benedict Baker
Advertisement:

Dead By Daylight is an asymmetrical multiplayer survival-horror game in which one player is a supernatural Serial Killer, and the remaining players are the hapless Survivors who've stumbled upon their hunting grounds. The gameplay is best described as an elaborate game of Hide and Seek - the Survivors must sneak alone or work together, to hide from or distract the Killer, who relentlessly pursues them through a randomly generated map. The Survivors' main goal is to repair the generators hidden throughout the map, which will power the gates leading to the exitsnote Though, if the Survivors are desperate or well-prepared, there is a hidden secret exit that will only open once the survivors use enough special keys to unlock it - or after the killer has whittled down enough of their party. Or both., while the Killer's main goal is to hunt down, maim, capture, and ultimately sacrifice the Survivors by impaling them on hooks strewn throughout the mapnote But with the right equipment, the killer can personally execute them. Survivors must deal with timing skill checks that can alert the Killer if they fail, while Killers have trouble navigating over obstacles like wooden pallets and windows. Special perks and equipment can radically change the playstyle of both killers and survivors, leaving both sides guessing how their opponents will react to the hunt and chase. Survivors can equip a small variety of special equipment that temporarily boosts their abilities, while each Killer has a unique power (and sometimes sub-abilities) that lets them control the playing field or improve their ability to hunt. And at the start of the match, no player can see the other players' abilities and must deduce their strengths and weaknesses, the most important of which is the type of Killer and their power.

The game came out on June 14th, 2016, and is available for purchase on Steam. The game was made available for PlayStation 4 and Xbox One in June 2017 and Nintendo Switch in fall 2019.

In 2018, Behaviour Interactive announced Deathgarden, a Action Spin-Off about a Sci-Fi Blood Sport that shares several similar gameplay elements. In May 2022, Behavior announced another spinoff in Hooked on You, a Visual Novel game where the player gets to romance one of four killers between the Trapper, the Wraith, the Huntress and the Spirit. No, really.

See also Identity V, an extremely similar game by Joker Studio, Netease, and Behaviour Interactive itself assisting with the development for mobile phones, only Lighter and Softer and with a Tim Burton-esque makeover.

Dead by Daylight provides examples of the following tropes: