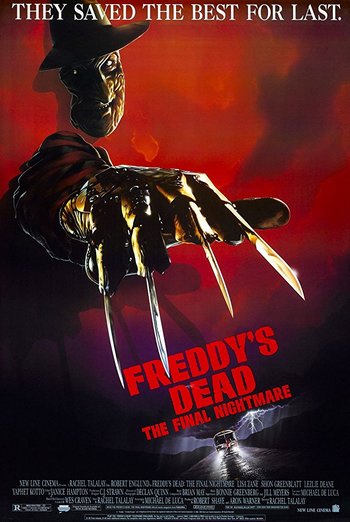 Only the good (bad?) die young.
Freddy: Time to start all over again.
Maggie: But this isn't Springwood!
Freddy: Hehehe... Every town – has an Elm Street! Haaahahaha!

Freddy's Dead: The Final Nightmare is the sixth film and supposed finale in the A Nightmare on Elm Street series, released in 1991.

In "ten years from now", Freddy has managed to kill every child in Springwood, sans one whom he has left alive to aid in his plan to break out from there, so that he can continue killing wherever he chooses to.

Another when he reveals to said daughter his Omnicidal Maniac ambitions in the page quote.