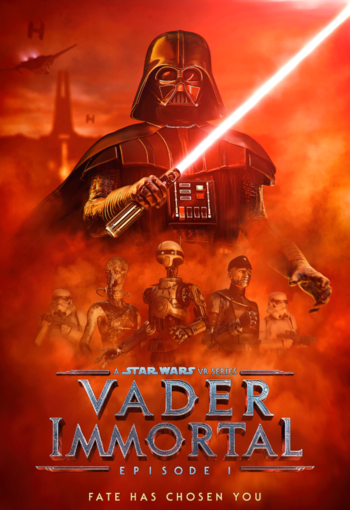 Fate has chosen you.
Advertisement:

Vader Immortal: A Star Wars VR Series is an episodic VR game for the Oculus Quest. Taking place in the Star Wars Expanded Universe, it focuses around the player, an unnamed smuggler who, along with their loyal, snarky droid named ZOE3, finds themselves trapped on the planet Mustafar after they're dragged out of hyperspace by an Imperial Interdictor cruiser. They're then taken to be the honored guests of one of the most feared men in the Empire: Darth Vader.

For, you see, you didn't just stumble into the system by chance. Darth Vader has been searching for someone, a descendant of a Force-sensitive woman named Lady Corax that lived on Mustafar eons ago. With your abilities, Vader hopes to unlock a sanctum deep beneath his fortress, and overcome death itself to reunite with his dead wife, Padme Amidala. Now, you and ZOE3 have to escape from Mustafar, while also trying to survive Vader's scheme.

In-universe, the game takes place after the Secrets of the Empire VR experience at Disney Springs.