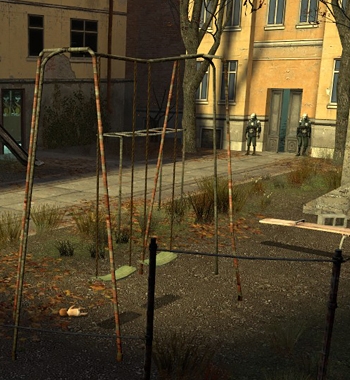 "...but I just saved a bundle on playground-maintenance by switching to Combine!"
"As the sound of the playgrounds faded, the despair set in. Very odd, what happens in a world without children's voices."
— Miriam, Children of Men
Advertisement:

Children Are Innocent (Usually.) Children Are Special. Children make us smile and make us laugh. As adults grow older, Think of the Children! becomes a primary motivator for many things they do, because kids are how they Fling a Light into the Future.

...Unless that light is extinguished.

Perhaps there was a Sterility Plague, Gendercide, or Herod got a little overzealous; or maybe they were all rounded up to power the phlebotinum generator. At any rate, life is now grey, dreary and pointless, since there's nobody to build a future for.

On the idealistic end of the scale, it can be a temporary case of mass kidnapping, requiring nothing more than a few Big Damn Heroes to get them back. But if the poor things are dead or breeding has simply been closed off as an option, you've fallen off the cynical end straight into New Crapsack, Halfemptia with plenty of Abandoned Playgrounds. Expect a rise in Straw Nihilists, possibly spiraling into Bomb-Throwing Anarchists and Terrorists Without a Cause. The Fundamentalist is likely to decide this is some sort of divine retribution, and will be happy to explain why. The Anti-Nihilist may try to find some reason to go on, but he's facing a serious uphill battle.

For the inverse of this trope, see Teenage Wasteland.

NOTE: Do not confuse with Hide Your Children, where a Video Game shows no children to prevent the player from running around murdering them. The game must explicitly spell out that all kids are dead or missing to qualify.