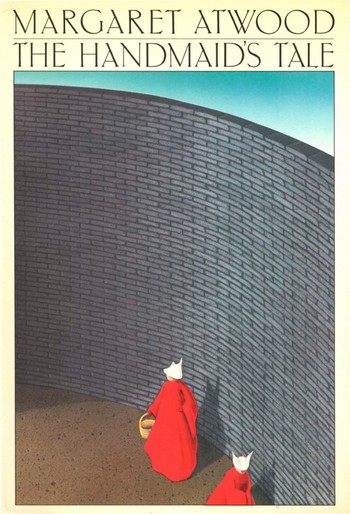 A 1985 novel by Margaret Atwood, set 20 Minutes into the Future. A portrait of a Dystopia.

The setting is the Republic of Gilead, a newly-established theocracy still fighting rebellion at its borders in the former United States. Money has been abolished; laws are based on the state's interpretation of Christianity, and many crimes are punishable by public execution. Everyone has a specific role to play - especially women.

Global fertility rates have plunged well below replacement levels. Pregnancy is rare, and one in four of those children will be born with severe birth defects. In Gilead, fertile women are rationed like everything else. Handmaids are given to the Commanders and other high-status men of the nation, to bear children for them and their Wives.

The protagonist is known only as Offred - "of Fred", her current Commander. She can remember before, when women still had rights and were allowed to read; her mother, a feminist who raised her alone; her husband, who left his first wife for her; her daughter, who was a toddler seven years ago when the revolution happened and the family tried to flee to Canada. Offred has seen none of them since, though she is told her daughter is happy with her new family.

Offred also remembers her time in the Rachel and Leah Centre, under the training of the Aunts, to become a Handmaid. She remembers her friend Moira, who escaped from the Centre, and the other women, who did not. Now they, like her, live in the homes of the wealthy, going from one assignment to the next, hoping to become pregnant. Failure to bear a healthy baby means death or worse, and Offred is running out of time to produce one.

Very popular in Anglophone high school English classes, although the confronting adult subject matter leads to a crusade to ban the book every five years or so.

A Comic-Book Adaptation with art by Renée Nault, The Handmaid's Tale: The Graphic Novel was released 26 March, 2019.

The Testaments, a follow-up written by Atwood set fifteen years later, was released in September 2019. Compare Christian Nation where the USA also becomes a theocratic dystopia, but at a different point in history and for different reasons.