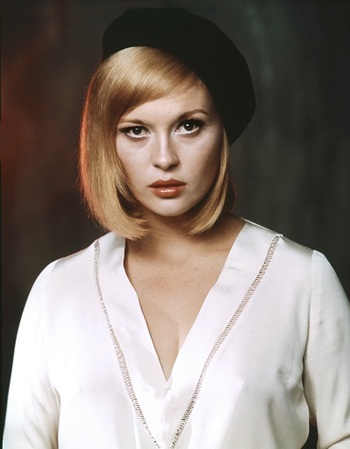 Dunaway began her career on Broadway in the early 1960s, and made her film debut in 1967 with The Happening (not the one you're probably thinking of). Her performance instantly got people talking, and earned her a Golden Globe nomination for Best New Star of the Year. But it was her next film that would truly change things in her favor. She had been turned down for Bonnie and Clyde when the casting director felt she didn't have the right face for the movies. But after watching The Happening, director Arthur Penn was instantly persuaded to let her read for the role of Bonnie Parker, and subsequently cast her. Despite the film initially earning a negative critical reception for its violent content, it became a hit. Dunaway was now a star and earning rave reviews.

She would follow this up with another smash hit, The Thomas Crown Affair, in which she appeared opposite Steve McQueen (who would later call Dunaway the best actress he ever worked with). Her next films didn't quite set the world on fire, but she hit it big again with Roman Polanski's Chinatown. Things escalated even further when she lobbied for the role of a ruthless TV executive in Network, in the face of insistence that it could do harmful damage to her career. She won an Academy Award for her performance.

Things took a sharp U-turn in the '80s, however. Christina Crawford, daughter of Hollywood star Joan Crawford, released Mommie Dearest, a scathing memoir recounting her abuse at the hands of her stepmother. Seeing gold, producers greenlit a film adaptation. Coincidentally, shortly before her death, Crawford had named Dunaway as one of the only actresses of the New Hollywood who "has what it takes" to become a true star and portray Crawford herself in a movie about her life. So Dunaway immediately accepted the role of Crawford, sure that the film would be hard-hitting and provocative. Unfortunately the result was a hammy melodrama that turned Joan Crawford into a deranged cartoon character. The studio changed its strategy and marketed the film as a comedy. But the damage was done, and audiences could not take her seriously afterwards. Still, she was nominated for a few awards. (Reportedly this film is her personal Berserk Button, and interviewers are forbidden to ask her about it.)

She's still acting away in independent films, television and on the stage. In fact she won three Golden Globes post-Mommie Dearest. She also released a memoir in 1995 called Looking for Gatsby and was awarded a star on the Hollywood Walk of Fame in 1996.