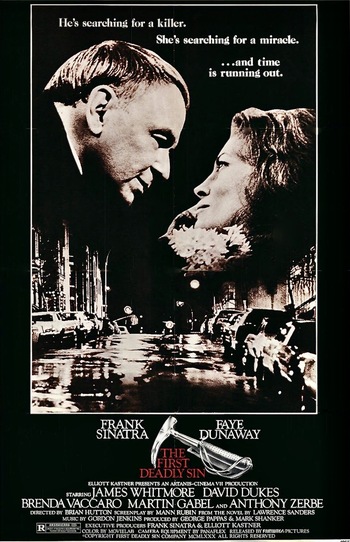 The First Deadly Sin is a 1980 crime film based on the 1973 novel of the same name by Lawrence Sanders, directed by Brian G. Hutton and starring Frank Sinatra and Faye Dunaway.

Detective Edward Delaney (Sinatra) is an NYPD homicide cop weeks away from retirement. He picks up what promises to be his final case — a man was murdered on the sidewalk by an unknown assailant, who struck him in the head with an unknown weapon — with nothing more to go on than that the killer used a weapon with a round, tapered end.

Delaney consults an expert in medieval weaponry, who ascertains that the murder weapon must have been a modern-day tool. Doing some research on his own, the weapons expert discovers that the killer used an ice axe. Meanwhile, Delaney learns about another deadly attack committed not all that far away, in which the victim suffered similar wounds to the skull. After looking at past crime reports, he determines that a serial killer is stalking Manhattan.

While all this is happening, Delaney's wife Barbara (Dunaway) is dying. She went into the hospital for kidney stones, but doctors found her kidney badly diseased and damaged and had to remove it, and she is growing steadily weaker as infection rages in her body.