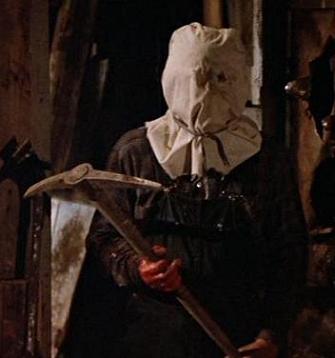 I have a pickaxe, and I'll put it through your teeth!
"A downward swing of the Pickaxe can crush stone; a human head would be an afterthought."
— Pickaxe description, Dark Souls

A Sub-Trope of Improvised Weapon and closely related to Shovel Strike, pickaxes are tools used to break up rocks and earth but like most handheld objects can easily be appropriated as a weapon. Like the sledgehammer, which is highly similar in use, most pickaxes are far too heavy to wield effectively against an armed or skilled opponent. On the other hand, its large size and shape make it highly intimidating, and against slow moving enemies like zombies its power and ease of use make it a brutal skull-smashing machine. (That is, unless the spike gets stuck). While usually not as sharp as a conventional melee weapon, the narrow spike and heavy head of the pick make it effective against armor. Because of their original purpose, they're also exceptionally sturdy and not as likely to break as other improvised weapons. Ice picks, used as a climbing aid in icy regions, are also covered by this trope. Though smaller than mining picks, their blades will tend to have a sharper edge and the weapon will be easier to both control and conceal.

The use of pickaxes as weapons in ancient warfare is actually true. Their shape also influenced some warhammers and traditional axes to have a big spike on one side of their heads for punching through armor (and, on occasion, ribcages, heads and other things).

The pickaxe in this game functions as an invincibility powerup, not dissimilar to the hammer from Donkey Kong. With it, Captain Toad can crush stone blocks, immediately kill enemies and cannot be harmed.

The pickaxe in this game functions as an invincibility powerup, not dissimilar to the hammer from Donkey Kong. With it, Captain Toad can crush stone blocks, immediately kill enemies and cannot be harmed.