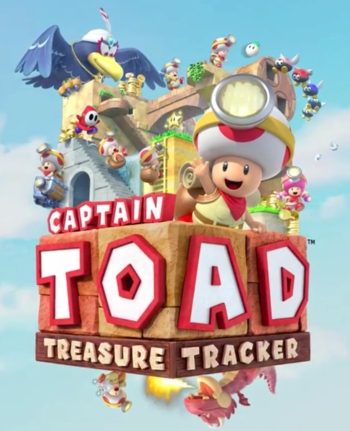 Taking the Captain Toad levels from Super Mario 3D World to their logical extreme, Captain Toad: Treasure Tracker is a Puzzle Platformer spinoff of the Super Mario Bros. seriesnote But more specifically, the aforementioned Super Mario 3D World. that puts you in the shoes of the Captain of the Toad Brigade, making this the first game since Wario's Woods where Toad is the primary player character. While out adventuring with Toadette, he comes across a power star, but just as they are about to claim it, a giant bird snatches it, along with Toadette, and flies off. It's now up to the Captain to get Toadette back, while collecting treasure through various levels.

Sounds easy, right? Well, there's the tiny fact that some of the levels can get rather complicated. You see, unlike Mario, Captain Toad can't jump (his backpack weighs him down). There's also the fact that the usual mooks from the Mario franchise aren't just going to let you make off with their coins, gems, and stars. As such, players will have to use their wits to navigate Captain Toad through breezy plains, haunted mansions, enemy-filled trains, dragon-infested volcanoes and stranger locales in his quest for treasure, while making sure to grab as many valuable gems as possible along the way.

The game has amiibo functionality, whereby scanning a Toad amiibo will unlock a hide-and-seek mode where the player has to track down 8-bit Toad sprites (This is unlocked by default on the Below-mentioned Switch and 3DS ports.). Other figures can be scanned to get 1-up mushrooms.

Originally released for Wii U, the game has been ported to the Nintendo 3DS and Nintendo Switch in 2018, both ports having replaced the Mario 3D World levels with content based on the kingdoms of Super Mario Odyssey. DLC for the Switch version was released in March 2019 with more levels, and a free update (also Switch-exclusive) implementing full two-character co-op play was released on February 13, 2019.

On 14 July 2020, both Captain Toad and Captain Toadette were made playable characters in Mario Kart Tour, along with a minecart as their kart of choice.

Captain Toad rides in a minecart and throws projectiles at things as he passes by.

Captain Toad rides in a minecart and throws projectiles at things as he passes by.