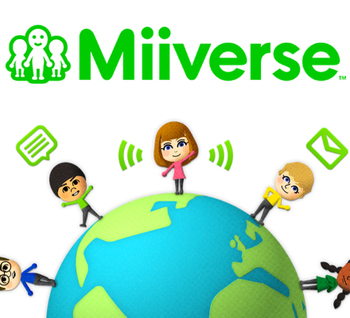 Nintendo's own social network integrated with the Nintendo Network online service, which launched alongside the Wii U on November 18, 2012. It was later made available for smartphones, tablets and PCs on April 24, 2013, before being expanded to the Nintendo 3DS on December 9, 2013.

Similar to GameFAQs, Miiverse was made up of countless communities, one for nearly every Wii U and 3DS game. In each community, posts and drawings could be made about the given game, and screenshots could be attached to them as well. Users were able to follow various communities, even if they didn't own that given game. In July 2015, communities were split into Play Journals, Discussions, and Drawings; Play Journals acting as user-by-user logbooks about game progress, while Discussions were general threads about a game. Developers were also able to use Miiverse to interact with the communities for their games, answering questions and giving updates about upcoming content.

On Miiverse, the equivalent of a Like or Favorite was a "Yeah". Drawings in a community were sorted by the amount of Yeahs they had, and user pages had a section about the posts they've Yeah-ed.

Miiverse services officially ended worldwide on November 8, 2017, inadvertently rendering several games impossible to finish to 100% Completion, as several games released during the lifespan of the service used it for everything from in-game achievements to entire gameplay modes

. Any players who requested their post history during the last thirty days of the service were sent a file containing all their entries and drawings during the following weeks. Fans of the service also managed to backup up all of the site's data here

. The site's official internet webpage redirected to a large "Thank You!" mosaic made from drawings in the year following the shutdown; the IP address for Miiverse is now defunct.

We thank you very much for your amazing support.