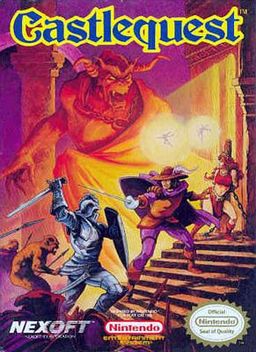 Not as great as you might think.
It's a simple story. Princess gets kidnapped by evil demon, prince finds out about said kidnapping, prince goes to demon's evil castle to save princess... pretty typical stuff, right? Well, this demon likes puzzles. The kind of puzzles that involve color-coded doors and keys.
Advertisement:

Yes, this is Castlequest, a brain bender of a game with a interesting premise, but terrible execution. Opinions on the game are mixed, but if you're looking for a different kind of puzzle game on the NES, it doesn't get more obscure than Castlequest.

The game was originally released in Japan in 1985 as Castle Excellent on both the Famicom and the MSX, as a sequel to a game called The Castle. The game is actually fondly remembered over in the Land of the Rising Sun.

Not to be confused with the BBC Micro game Castle Quest (two words).