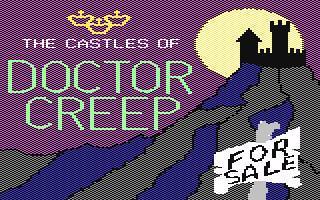 The Castles of Doctor Creep is a Puzzle Platformer for the Commodore 64 created by Ed Hobbs and published by Brøderbund Software in 1984. Your character (or characters in 2-player mode) are trapped in one of Doctor Creep's castles, and must escape. In your way are various devices, traps, and monsters created by the titular doctor, and it's up to you to find a way to get past them all and through the exit door.

There are 13 castles (14 counting the tutorial), ranging from the easy (e.g. Freedonia, Sylvania, Tannenbaum) to the brutally hard (e.g. Baskerville, Rittenhouse, Lovecraft).

A group of programmers managed to reverse-engineer the game and create an unofficial Mission-Pack Sequel called The Dungeons of Doctor Creep, released in 1985. This expansion features 10 more castles and some altered mechanics, including invisible ladders.

A lesser-known PC port was created by the original programmer, but it had some graphical issues and did not survive the transition to 32-bit. A more direct port of the original game, as of March 2022, is available