The Many Deaths of You 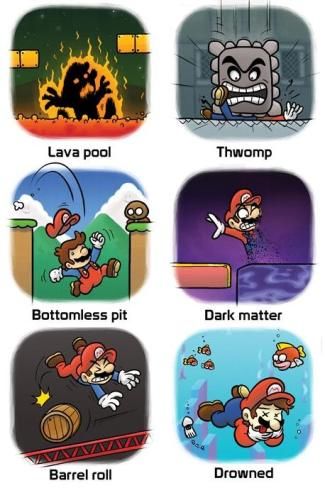 .
Used with permission.
"[player character] choked on his own vomit/was killed by an exploding frog/was killed by trying too hard to be a great writer/broke his leg while kicking at the air/died of exhaustion on a bad day/died of old age."
— Some of the weirdest ways to die in ADOM
Advertisement:

Some games have a large variety of unique animations for deaths other than the standard "take too much damage and then collapse". These are most likely to be adventure games in which you face a variety of perils, but sometimes action games can have a lot of ways to die.

Likewise, Gamebooks let you die many different ways, some of them quite morbid.

It's occasionally lampshaded by some of the classic point-and-click adventure games, in the form of Have a Nice Death. When the game has only one or two unique ways to fail that may not always involve death, it's Non Standard Game Over. If some of the deaths result from pure player stupidity, this overlaps with Yet Another Stupid Death.

Alternative Title(s): Many Ways To Die