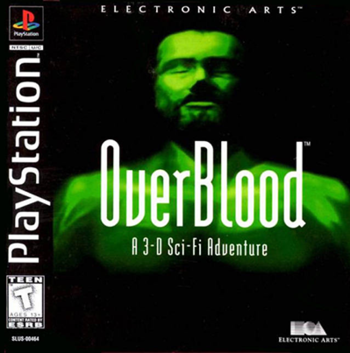 OverBlood is a Sci-Fi Survival Horror/Adventure game for the PlayStation. Developed by Riverhillsoft, it was first released in Japan in 1996 and was later localized by Electronic Arts for the west in 1997. While often seen as one of the first Resident Evil clones, it was actually in development around the same time and it's really more of a Spiritual Successor to Riverhillsoft's even lesser known 3DO Interactive Multiplayer game Dr. Hauzer (which in turn drew inspiration from Alone in the Dark, much like Resident Evil did).

The game begins as the protagonist wakes from cryostasis with amnesia. After saving himself from the life-threatening cold of the room by wearing a small vest he calls a jacket, he learns from a computer terminal that his name is Raz (No relation) Karcy and that he was never supposed to wake up. With the aid of the robot Pipo he begins exploring the mysterious complex in which he is trapped, discovering the aftermath of an earthquake and the unfortunate results of a Super Soldier project. Things get complicated when he discovers he is infected with the mutation-causing ARNA Virus and that someone wants to make sure he never escapes...

It is notably more puzzle oriented than other Survival Horror games, having less than ten enemy encounters over the course of the entire game, counting the boss. It was also commended for its use of companions whom you could control at will for puzzles.

While it was at the time considered rather average, it is now incredibly entertaining: the laughably illogical puzzles are just barely passable, the animations for everything from jumping to just standing still are ridiculous, and its otherwise interesting but forgettable plot is chock full of Narm.

The game is later followed by a sequel, OverBlood 2.

If you actually looked up this forgotten game, there's a good chance its because you watched either the Super Replay of it on Gameinformer.com, or the Wrongpurae of it by Retsupurae.

These games have no relation to Blood Over, a 2D Beat 'em Up game.