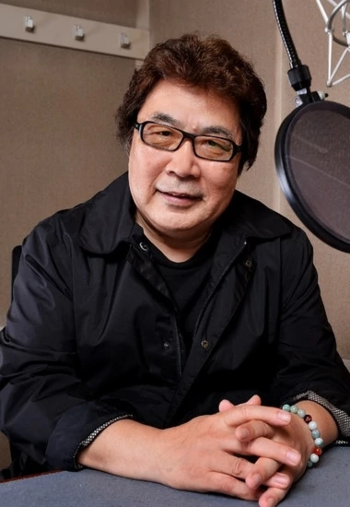 One of the most revered veteran Japanese voice actors ever. Tesshō Genda (born May 20, 1948 as Mitsuo Yokoi) is known for his gruff, heavy voice which makes him quite the go guy for gung-ho, big guy roles or at least those fulfilling the Mighty Glacier role. He's also quite the Memetic Badass, mostly due to his dub roles as two very very famous Western Animation roles: Batman and Optimus Prime. In his voice acting career, he is often landed with roles that share relationship with Akio Ōtsuka. According to Anime News Network,

he is the fourth most prolific seiyuu, after Takehito Koyasu, Shin-ichiro Miki and Toshiyuki Morikawa.

He's also into ballet, and is popularly known as "Pirouette Genda."

As a veteran voice actor with gruff voice, it is not really that surprising that he's usually the go-to guy to dub characters played by Arnold Schwarzenegger in Japanese.