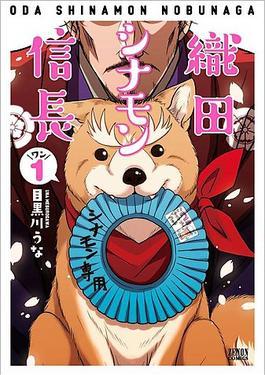 1582, Honnoji Temple, the Sengoku Jidai. Oda Nobunaga has been betrayed by Akechi Mitsuhide. As Honnoji Temple burns around him, the legendary warlord opines he wouldn't mind being reincarnated, even if he came back as a dog.

Be Careful What You Wish For.

The feared Nobunaga is now Cinnamon, a Shiba Inu living in modern day Japan and owned by teenage girl Ichiko. But he's not alone. Other warlords like Takeda Shingen, Sanada Yukimura and Uesugi Kenshin have been reincarnated as pooches as well. Now the famed figures of the Sengoku Era spend their days doing typical dog things and talking about their time as humans.

Oda Cinnamon Nobunaga is a debut Slice of Life and Sengoku Period trivia comedy manga from creator Una Megurogawa, serialized in Monthly Comic Zenon since 2014. It has ended on August 25th, 2021.

Received an anime adaptation during the Winter 2020 season, which can be watched on Crunchyroll