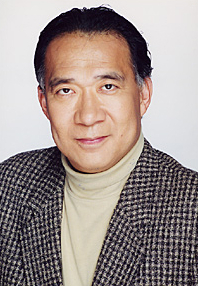 (After Face Faulting) Guess we'll have to do it in his stead.

Needed a Big Guy or a Cool Old Guy? This voice actor was your man. Daisuke Gōri (real name Yoshio Nagahori, February 8, 1952 – January 17, 2010) was one of the more veteran Japanese voice actors, and has certainly built up quite a rep. He usually voiced Large and in Charge characters but could also do other roles just fine.

Unfortunately, on January 17, 2010, three weeks shy of his 58th birthday, he was witnessed collapsing dead on a Nakano sidewalk with a knife, a suicide note and last will on his person, and blood dripping from his wrist. Diabetes had been eating away at his vision, and he'd mentioned to coworkers he had difficulties reading his lines; having had a passion for voice acting his whole career, Gōri was being cut off from one of the biggest joys in his life. In a bout of depression, he'd recently told close friend Kazuhiko Inoue "I've grown old".