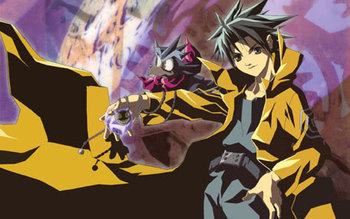 King of Bandit Jing is a manga series by Yuichi Kumakura, which originally ran from 1995 to 1998 in Comic Bom Bom. A sequel manga series, known as Jing: King of Bandits: Twilight Tales outside of Japan, ran in Magazine Z from 1999 to 2005. The manga was adapted into a Thirteen Episode Anime by Studio DEEN in 2004.
Advertisement:

Jing is an enigmatic young wanderer living in a surrealist world of fantasy and treasures aplenty. His travelling companion is Kir, a wisecracking albatross with a penchant for beautiful women.

Yet few suspect this boy is actually the mythical "King of Bandits", a Phantom Thief capable of stealing any valuable no matter how rare or well-guarded it may be. With a fast wit and a good heart, Jing pits himself against the selfish and unjust of the world in his quest for the ultimate prizes.

The manga and anime are a series of short standalone stories written around the treasures sought after by Jing. He is usually accompanied in each adventure by a "Jing Girl", a female companion whose personal story arc is tied closely to the specific tale she appears in. Much of the appeal of the series comes from the visual style and composition of the setting, bordering on Expressionist.

The anime adaptation shifts a few of the original manga's story arcs, as well outright substituting a few them for ones unique to the show. Notably, its three part finale is only the arc of the manga's fifth volume.

Immediately following the manga, Kumakura went on to create a sequel series called, King of Bandit Jing: Twilight Tales. Also coming at seven volumes, Twilight Tales did away some of the sillier aspects of the original and carries a darker, more mature tone; Jing himself is apparently a few years older by this point as well as Kumakura's style seemingly having settled with the approach of the final volume of the original series. On the other hand, the closest that the anime series got to a sequel was an OAV called "King of Bandit Jing: Seventh Heaven", an adaptation of the fourth volume of the original manga; this somehow managed to be even more incomprehensible than the initial series run already was.

"As long as this world is full praise...The King of Bandits will continue to steal."