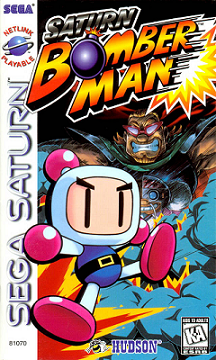 Saturn Bomberman is a 1996 installment in the Bomberman franchise for the Sega Saturn. The game follows the tried and true grid formula, and marks the first appearance of Dr. Ein and the Hige Hige Bandits.

The legendary monster Crator was imprisoned in the Crystal Tower with four crystals, but Mujoe unsealed Crator and enslaved it with the monster controller. Frantically, Dr. Ein sends a message requesting White Bomberman and Black Bomberman to stop Mujoe and his gang from Taking Over the World.

In Normal Game, stages are laid out with various obstacles, and destroying all of the Core Mechas (mechanisms with glowing red orbs) opens the exit. This continues for five worlds, each ending with a boss. In Master Game, all the enemies of the floor must be destroyed within the time limit, with a timed boss every four floors for twenty total floors. The famous Battle Game supports up to ten players, featuring Hudson characters (like Hi-Ten Chara Bom). It also allows online matches due to the modem add-on (except in the PAL version). To date, only Atomic Bomberman rivals this Battle Game.