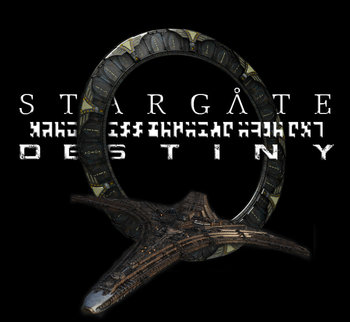 Where will Destiny take you?
Advertisement:

Stargate Destiny is a Play-by-Post RPG on Ongoing Worlds created by Avenuewriter Retool of Stargate Universe. Much like the series, the game follows a group of soldiers and scientists who have become stranded on the far side of the universe aboard the Ancient ship Destiny. However, those are where the game's similarities to the show end. The game's plot is set in an Alternate Continuity where the player characters have taken the place of the original crew, the worlds they visit are far stranger, and half the crew is comprised of aliens who have decided to join the mission.

The game is no longer running. With both it's page and subsequent manual being deleted.

This Game Has The Following Tropes